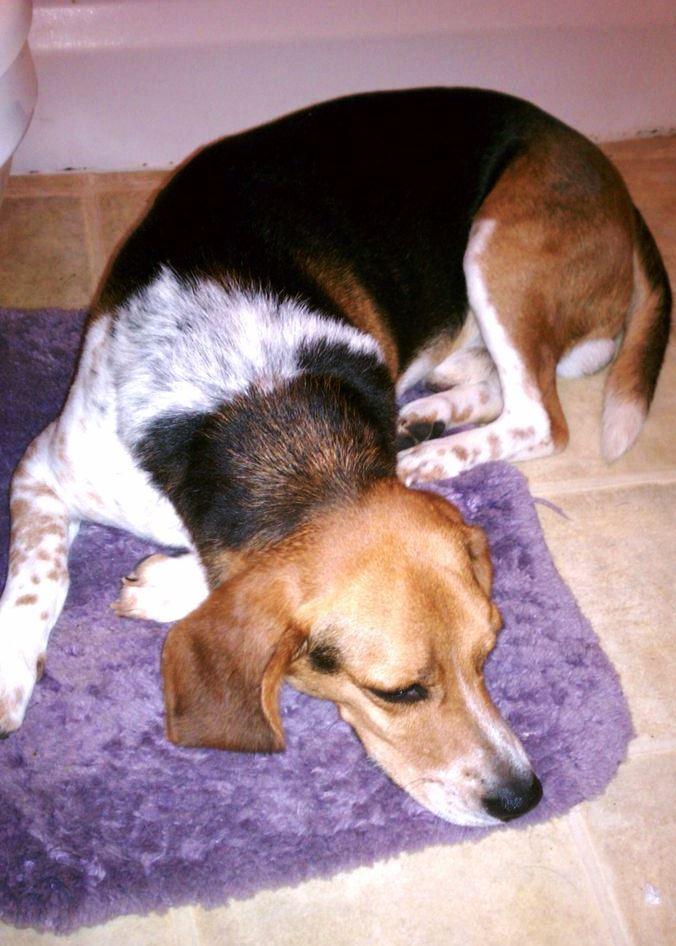 Justin Woodard and Chris Burbank found something devastating in their backyard when they returned to their home in the Moores Mill community on Jan. 5.
A  PIT BULL had gotten into his backyard and was attacking their 8-year-old beagle, Buddy, who they'd raised from a puppy. Now Buddy, who suffered fractured ribs, a torn diaphragm, nerve damage in his neck and a trachea nearly torn in two, remains hospitalized in a fight for his life.
"He was an innocent dog in his own yard who was attacked by someone else's dog who (wasn't) properly contained to their own property," Woodard said. "All the doctors and techs have said what a little fighter he is. He has fought hard."
"We don't think it's fair to give up on him because this isn't his fault," Woodard said. "As long as he's fighting we will fight with him." 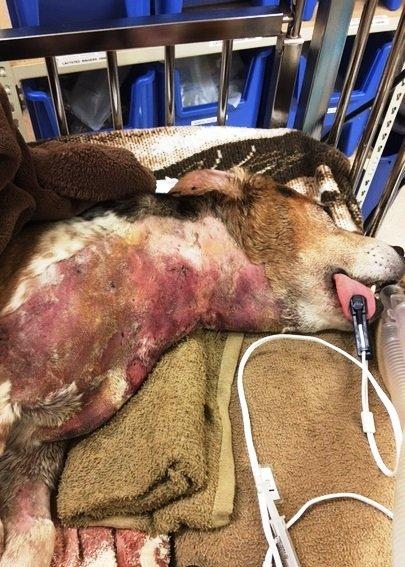 With that fight has come steep veterinarian bills. Buddy has racked up more than $8,000 in bills thus far, and his bills could climb up to between $12,000 and $14,000 if additional surgery is required.
Woodard and his husband, who married in December, have started a GoFundMe page to help fund Buddy's recovery. That page, which so far has raised just under $400, can be found by clicking here.
Buddy's condition has improved, but he still has a long way to go. 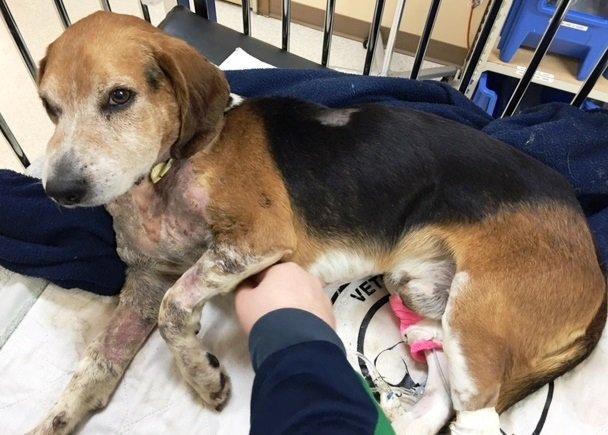 "Buddy has pneumonia (that) set up because he aspirated on either some food or water due to laryngeal paralysis. As of Sunday things weren't looking good but things have changed a little," Woodard said. "He was able to have surgery for the laryngeal paralysis (Sunday) and he's now breathing a lot better. He seems to be feeling and doing a lot better."
A staff member at Veterinary Regional Referral Hospital in Decatur, where Buddy is being treated, confirmed on Wednesday that his condition has greatly improved, particularly over the past 24 hours.
Woodard said that the dog who attacked Buddy is still loose in the community. He and Burbank were able to get the dog into a crate before taking Buddy to the vet but, when they returned a couple of hours later to get their checkbook, the pit bull had chewed his way out of the crate and was gone.
"He ended up coming back the next night and the exact same thing happened. Animal control said they would come out the next morning and he escaped another one of our crates that night," Woodard said.
A pit bull rescue group found the dog and turned him over to the authorities, but the lost dog was apparently returned to his owner, Woodard said. The pit bull later got loose again and paid another visit to Woodard's property.
"We haven't seen him since (Monday) afternoon in our yard," he said. "We immediately called Animal Control but, again, they said they wouldn't come out until the next morning. Unfortunately we didn't have another crate to put him in."
Madison County Animal Control has not returned AL.com's request for comment on the case.
Woodard said he and Burbank are considering a lawsuit against the pit bull's owner, but for now are just concerned about getting Buddy well and home where he belongs.
Anyone who wants to help with Buddy's medical expenses can donate through the GoFundMe page or by contacting Veterinary Regional Referral Hospital and making a donation directly. To donate through the veterinary hospital, call 256-350-7001 and ask to make a payment to "Buddy the Beagle's" account.
http://www.al.com/news/huntsville/index.ssf/2016/01/huntsville_mans_beagle_buddy_f.html

Buddy may have suffered the entire hour they were gone with the mutant gripping his throat and shaking back and forth. Please people, never leave your pets outside again. My basset hound Jessi died in August of cancer, but she always looked like a beagle to me. Her coloring was just like Buddys. Jessi's last day to live - Aug. 6 - she tried to crawl outside....she knew she was dying. I helped her to get a few feet off the patio because she was loosing control of her bowels and kidneys. THE ENTIRE TIME THOSE PIT BULLS NEXT DOOR BARKED AND GROWLED AT US. EVEN WHEN JESSI JUST SLIGHTLY MOANED THEY WOULD GROWL. I WAS RECORDING THE ENTIRE THING. I got her back inside our backporch and she died there that night. I would be the perfect person to adopt pets from the shelter...I would choose old dogs that need a home. But I'm not going to. When my other basset Jake dies I will never own another dog and live like I've had to live next door to huge pit bulls and a breeding operation. Even if Buddy's owners had been standing right there by him, this pit would have tried to rip out his throat and minus a knife or gun and luck in using it, they still couldn't have saved him.

This pit bull should simply be shot if it returns.

I want to give a warning to Buddy's owners. Do not let your guard down ever!!! You have probably never experience a pit bull attack on another dog before. You have been through a lot but take the time to listen to these words. That pit will come back to kill Buddy. It knows that Buddy didn't die and it will come back the first chance it gets. This happens all the time to horses, ponies, burros, donkeys, goats,alpacas, Llamas, chickens, etc. In North Carolina a few years ago 2 pits attacked a horse twice and it didn't kill him. The third time they killed him and his poor owner had a heart attack trying to save his horse for the 3rd time. Please take care of Buddy and do not let this happen again to him !!!