PALMERSTON NORTH, MANAWATU WHANGANUI NZ - A PIT BULL/NEAPOLITAN MASTIFF CROSS CHARGED AT PHILLIP MCLEAN'S DOG HE HAD LEFT IN HIS CAR - WHEN HE WENT TO HIS DOG'S AID THE PIT TURNED ON HIM AND LATCHED ON TO HIS LEG AND WOULD NOT RELEASE UNTIL ANOTHER MAN RESORTED TO THE "FINGER IN THE BUM" TECHNIQUE

The desperate actions of a man who poked a finger into the bum of an attacking dog may have saved Phillip McLean's leg.

McLean's daytrip to Palmerston North turned into more than a week lying in a hospital bed after he was set upon by a PIT BULL NEAPOLITAN MASTIFF CROSS.  The Hunterville man was visiting a friend on Terrace Street, near Palmerston North Hospital, last Wednesday when he heard growling.


A pit bull neapolitan mastiff cross, allegedly let out from a nearby block of flats, had its paws up on McLean's vehicle and was in the middle of a growling match with his dog, a rottweiler, who he had left in the car with the window partially down.
McLean managed to get the two dogs separated, but the pit bull then latched onto his leg and refused to let go. McLean said the pain was "unbearable" as the dog pulled off a big chunk of meat from his thigh, then went back in for his calf.
He tried to open the dog's clamped mouth, tried shaking it and eye-gouging it, but the dog would not budge.
"At that stage, I dropped to the ground and it dragged me a couple metres down the road."
Another man heard the commotion, grabbed the dog by the hind legs and tried to pull it off the injured man.  In a random act of desperation, HE STUCK HIS FINGER IN THE DOG'S BUM, PROMPTING IT TO LOOSEN ITS HOLD.
"Four or five people jumped on it and that's when I got away."
McLean said it was a "surreal feeling", looking down and seeing a gaping hole in his leg. 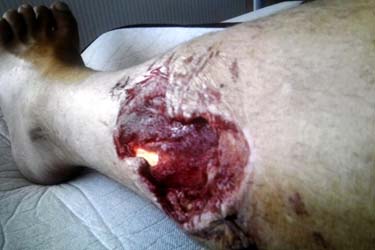 He has had three surgeries, including removing skin and cleaning infected areas, and also a skin graft operation on his left thigh and calf muscle.
"I started counting the stitches, got to 23 and then gave up. It's a nasty bite." 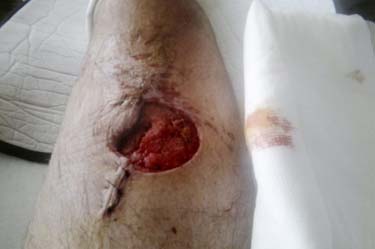 He owes his saviour a beer, he said.
Palmerston North City Council head of environmental protection Wayne Jameson said there were about 100 to 110 dog attacks in the area each year.
These incidents ranged from dogs tearing clothing, through nasty bites and hospitalisations.
He said about 40 per cent of the reported incidents were dog attacks on people, while the other 60 per cent were dog-on-dog attacks.
The offending dog is in the pound. It was likely a court hearing would determine whether the dog would be destroyed, Jameson said.
Manawatu Whanganui SPCA general manager Danny Auger said the pit bull breed had a tendency to be aggressive.
"A dog of that size can do a lot of damage."
He said it was up to dog owners to be responsible and aware of their animals.