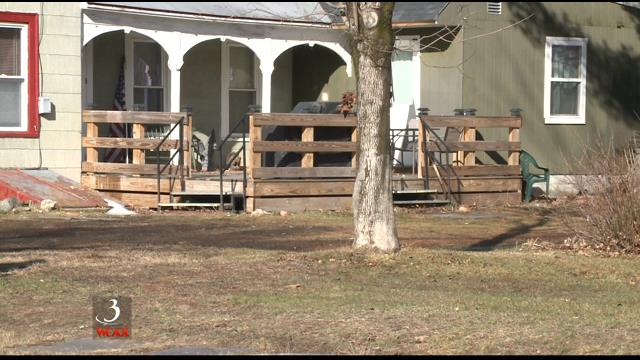 (PLEASE READ THE COMMENT TO THIS STORY BY JIM STOOPS WHO IS ONE OF THE VICTIMS OF PIT BULLS AND THEIR JUDGEMENT PROOF OWNERS THAT WE  ARE NOT AWARE  OF.....I WOULD LIKE TO HEAR HIS ENTIRE STORY!!!)

"My biggest concern is I don't want someone else to get attacked," Eric Gross said.

Gross is a school teacher, father, husband and dog owner in Fair Haven. He says an evening walk with his dog took a frightening turn.

Gross says he dislocated his shoulder fighting the  3 PIT BULLS  off, but eventually got his American foxhound, Dexter, to safety. He claims this isn't the first time the dogs have attacked neighbors.

The owners of the dogs declined an on-camera interview, but deny the dogs have been dangerous. They call the accusations a "joke" and say the dogs got out when a house guest opened the front door. According to them, their dogs are always in a kennel.

Police are investigating.  "Ultimately, it could result in a dangerous dog hearing with the select board, which could range from the select board ordering the dog to be muzzled, to be chained," Fair Haven Police Chief William Humphries said.  "Ultimately, they could issue a warrant for us to take the dogs and have them humanely put down."

The investigation raises the issue of dog owner responsibilities, especially since Fourth Street in Fair Haven is often used by pedestrians-- the school and businesses are just around the corner.

"Accidents do happen and dogs do get away, but responsibility comes out of the owner, not the dogs.

Should be means of tickets or some sort of citation," Mulholland said.  The town of Fair Haven currently has ordinances for dog owners that include leashing but not fencing.

"If your dog's going to be out, you have to ensure your dog's not running loose," Chief Humphries said. "If you're going to have your dog out, make sure it's on a strong enough lead, go by the size of the dog."

Gross is against the idea of suing, but does say a long road to recovery is in store for him, as well as for his dog. He says Dexter is now skittish when other dogs bark and doesn't want to go outside.

"If you can't control your dog, make sure they're locked up," Gross said. "If you don't know how to handle your dog, get training or get rid of them. There's other people who are out there who can get hurt. Luckily, it was just me and my dog."

The select board is holding a vicious dog hearing next month to decide what should happen to the dogs in this incident. So far, they were ordered to be quarantined at the owners' home for 10 days after the incident and registered within the town. The Fair Haven Select Board will look at evidence presented by the police department in Fair Haven, as well as Whitehall, where the owners used to live.

Jim Stoops ·
Works at N/A Self Employed
In 1996 while living Florda I was attacked UNPROVOKED" by a neighbor' pitbull that broke its chain and jumped over my four-foot fence in my yard. My permanent injuries resulted in a double spinal fusion as well as bites. Although I won a legal judgement I was never able to collect since the homeowners were deadbeats!

This left me with permanent injuries.

Oh and I called the city 3 weeks PRIOR to put them on notice as the dog was aggressively charging the kindergartner walkers from the school on the street. I am glad that I was attacked rather than a child because I belive it could have been fatal.

I know there are nice lovable pist out there but dirtbag owners who are not responsible both in training and restraint need to be held liable!
Like · Reply ·

Jim Stoops ·
Works at N/A Self Employed
Oh I forgot to mention that it latched onto my wife's doxie which some how I was able to free (and had just superficial wounds)....
Like · Reply ·