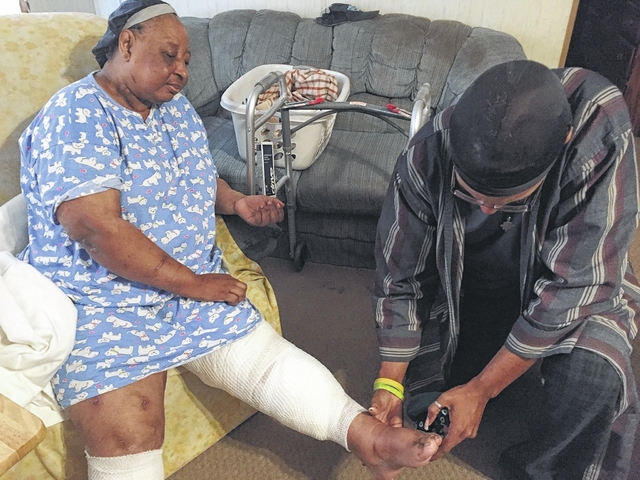 Wanda Oates never imagined that a daily chore of walking to her mailbox could lead to the horrific event that has left her with both physical and mental scars that she will carry for the rest of her life.

Oates, who lives just inside the Sampson/Duplin County line, was walking to her mailbox the morning of Jan. 20, when she was violently attacked by a pack of dogs. These dogs weren’t wild, Oates said, they belonged to a family member and had caused her trouble in the past.

“There is one that is always trying to get me when I go to the mailbox,” Oates said during an interview in her home last week. “I carried a stick with me that I would use to keep them away. But, on this morning, that one dog just took my stick away and knocked me to the ground. That’s when they all jumped in and started attacking me.”

In all, Oates said, there were eight dogs, but it seemed like many more.

“I always see them and they bark at me,” Oates said. “Once they attacked me, it felt like 100 dogs were on me at one time.”

Oates, who lives at the end of a dirt road off Brewer Road, said she was a good distance from her house when the incident happened, so her screams and pleas for help went unheard, as her son, Aaron, who was at home, couldn’t hear anything.

“Luckily, my niece came by,” Oates said. “She stopped and got the dogs off of me.”

A neighbor, Aaron said, called for emergency personnel to come out and assist Oates and called the Sampson County Sheriff’s Department Animal Control Division to come and get the dogs. 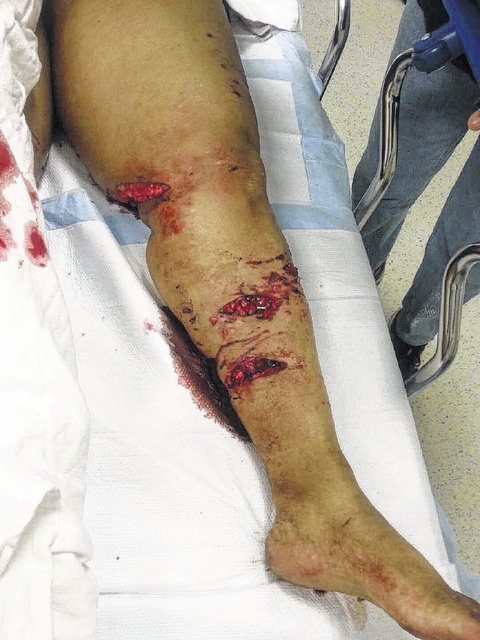 Oates was transported to Wayne Memorial Hospital in Goldsboro, where they found a total of 35 bite marks that spread over Oates’ entire body, from her neck to her toes. She was hospitalized for two weeks and three days, and received antibiotics to fight the infection in the bites. Oates also received the treatment for rabies, as the dogs had not received any type of rabies vaccination and couldn’t be tested after being shot.

“Those dogs have growled at me many times,” Oates said. “They have never tried to attack me. They have attacked other dogs in the neighborhood and killed some puppies, but they have never attacked me.” 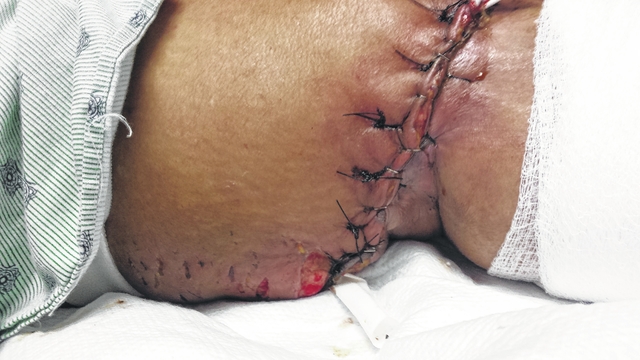 Oates suffered the worst wounds on her legs, where she will be required to have follow-up surgeries to install wound vacs. Additional surgeries may be necessary once the healing process is further along. In addition to the physical scars, Oates has been diagnosed with Post-Traumatic Stress Disorder and will continue taking medication for both the infections and mental anguish. Oates also had to receive two units of blood because of the large amount of blood she lost from the wounds.

“I just don’t know what made them turn on me that day,” Oates admitted. “I just don’t even feel safe coming into my house anymore. I’ve lived here my whole life and now I’m scared to even go outside of my house.”

According to Sgt. Jessica Kittrell, officer with the Sampson County Animal Control, all of the dogs were shot and killed as a result of the attack. Because of where the dogs were shot, and the fact that none had been vaccinated for rabies, the case had to be treated as a positive case, and Oates had to receive such treatment.

“We have never had any calls about these animals in the past,” Kittrell said. “I think we had a situation where a bunch of dogs had congregated at one house, they were being fed, and they decided to attack. Due to the threat to the public in the area, we had to shoot the dogs.”

Animal Control has returned to the area several times to handle the eighth dog, but Kittrell said the department’s attempts at locating the dog have been unsuccessful.

“I’m pretty sure the neighbors in the area will take care of him because of what he did to the victim,” Kittrell said.

Through her whole ordeal, Oates said she has a piece of advice for others.

“Be aware of all dogs,” she said. “You may think you know them and think they won’t attack you, but they could.”

Neighbors should 'take care' of any and all pit bulls the day they move into the neighborhood.

I'm praying for you but most of all I thank God you are still here love you and God bless!!!!!!!!