Robin Elgie, a B.C. man who was injured in a dog attack Christmas Day, is home after seven surgeries to repair his damaged arms.
Two bully-breed dogs attacked the 66-year-old in his Fort. St. John trailer after chasing his small dog Goldie inside, then turned on him and his girlfriend, also killing their cat. The dogs were shot by RCMP officers responding to the incident.
Family and friends of the couple are demanding that the dog owner be held responsible.
"Your life is forever changed. You don't feel safe in your home," said Bobbie Spencer, Elgie's friend, who is angry that the dog owner is not "stepping up" to make amends.  RCMP continue to investigate the attack. The dogs' owner was out of town when the incident occurred.
Elgie is keeping a positive attitude.
"I think the main thing is more to make sure it doesn't happen again," Elgie told CBC.
The community launched a fundraiser to try to help the injured couple after the dog attack, but friends say that can't support the couple long term and urge the dogs' owner to 'step up'.
The injured man's work prospects may be limited. It will take at least two years before he recovers well enough to drive, and he will need a special knob on a steering wheel, as his left hand is permanently damaged, doctors told his daughter, Sheryl Elgie.
Doctors were also forced to cut off the tip of the mechanic's index finger to save his arm from an infection.
Elgie's girlfriend, Wendy Lee Baker, was left traumatized.
"She's so afraid of everything," said Elgie's daughter. "She's terrified to even open her door and feels so guilty because my dad was injured trying to protect her."
"[Wendy Lee] has been through a "TEXAS CHAINSAW MASSACRE". When I went in there I could not believe that band of blood across the wall," said Guy Taylor, Elgie's friend.
Taylor arrived at the home after Elgie was airlifted to Edmonton for medical care the day of the attack. 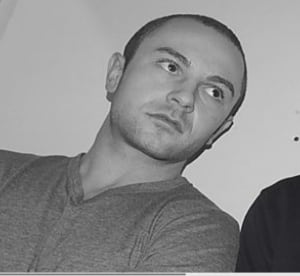 Neighbours and family members confirmed to CBC News that the two female dogs were owned by JESSE DISHER,  who often kept the dogs in a backyard pen.
People close to the young man, a local hockey star, say the incident has left him devastated.
Disher did not respond to multiple requests for an interview, but family members told CBC that he was a responsible dog owner whose dogs were "like his babies," and he regrets deeply what happened to the couple injured in the Christmas attack.
Neighbours told CBC the dogs had escaped from their backyard pen previously — a property only about 500 metres from where Elgie lives.
Records at the local SPCA confirmed that the older female dog had been picked up and released to her owner in November 2015, a few weeks before the attack.
"They were the friendliest things ever. They were licking me so hard my glasses came off. These are not killer dogs," said Candace Buchamer, branch manager of the North Peace SPCA, who was familiar with both dogs.
The attack on Elgie and Baker has prompted residents to meet with City of Fort St. John officials to discuss new rules to protect people from dog attacks and require owners to have insurance.
Paul Bosco is a Vancouver lawyer who specializes in injury cases. He said dog bites are one of the top 10 reasons his clients launch civil lawsuits.
Bosco said forcing dog owners to buy liability insurance before issuing dog licences is one step municipalities could take, as many dog attack victims are left with no way to get compensation.
Despite clear B.C. case law around dog attacks, Bosco said that many times injured people who sue end up with "hollow judgments," where even if the victim wins damages in civil court, the dog owner has no money to pay.
In B.C., Bosco said, there is a legal rule of thumb that every dog gets "one bite," but after one incident their owners face tougher penalties.
"Even if you are not home the owner is still responsible for their dogs. So if for example they leave their dog and it escapes their home and their dog attacks somebody, the owner can still be found responsible for that," said Bosco.
http://www.cbc.ca/news/canada/british-columbia/robin-elgie-dog-attack-fort-st-john-mauling-b-c-1.3486285

These pit bulls bit more than once. I don't see why a 'one free bite' rule is relevant after that very first bite during a sustained attack that includes hundreds of bites.

I think SPCA's Candace Buchamer should undergo a psychiatric evaluation to see if she's heavily autistic. Even after these pit bulls tried to kill a small dog, actually killed a cat, then tried to kill some humans, only a mentally ill person could say "These are not killer dogs".

Please stop contributing to these SPCAs as long as they keep hiring these mentally ill people.

"They were the friendliest things ever. They were licking me so hard my glasses came off. These are not killer dogs," said Candace Buchamer, branch manager of the North Peace SPCA, who was familiar with both dogs."

A normal person would have thought, 'Wow, I guess I was lucky all these dogs did was lick me!' This idiot had to say this on the record. I agree Sweetie Pie, there's something wrong with this SPCA worker.

Anonymous 8:50 PM, nowadays there's something seriously wrong with all SPCA workers. Reason: No SPCA will hire anyone who isn't a pit freak, and modern history has shown that pit freaks are by definition mentally handicapped or ill. They either have narcissistic personality disorder, or anti-social personality disorder or both, and the majority seems to share this autism trait that Buchamer shows. (Ie, even after a pit bull has killed, they'll say "But it's not aggressive")