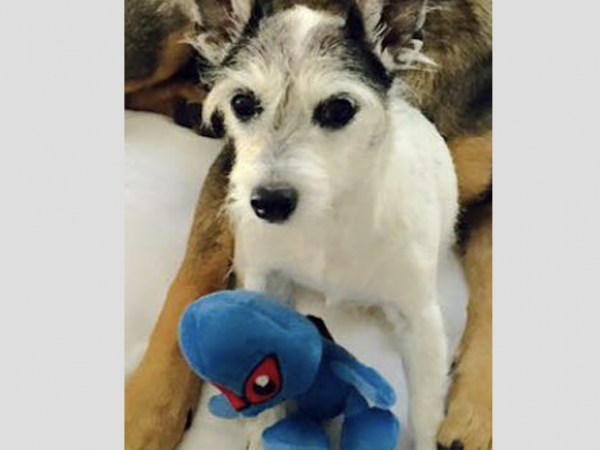 Lido Beach, NY - The owner of a dog that died after she was attacked by TWO PIT BULLS  at the Nickerson Beach dog park in Lido Beach Monday night is seeking help to find the attacking dogs' owners.
Jake, a 14-year-old Jack Russell terrier, was playing at the dog park when two dogs suddenly snapped and attacked her, according to Rachel Engel, a friend of Jake's owners. When Jake's owner tried to break up the fight and retrieve Jake, she got bit by one of the dogs.
Jake died at the scene, and the attacking dogs' owners took off with their dogs while Jake's owner tried to comfort her, Engel said. The attacking dogs were described as a gray and white pit bull wearing an American flag bandana and red collar and the other as a pit bull/brindle mastiff mix.
There was another gray and white pit bull who was not involved with the fight at the scene. The two pit bulls looked like the litter mates, Engel said.
There were a total of three owners and three dogs that "all looked like they knew each other," but it is not known which person owned which dog, according to Engel. The two female owners sat and chatted, and the male owner observed all three dogs.
The woman with the pit bull that did not fight stayed behind. She is described as being of average height with shoulder- length brownhair, Engel said.
The male owner is described as having dark hair, between 5-foot-8 and 5-foot-9, wearing black gym shorts and a black T-shirt. The other woman was described as wearing black reading glasses, brunette/black hair in a ponytail, and on the shorter side, Engel said.
"Besides losing Jake to such a horrific tragedy, the owners fleeing the dog park leaving Jake dead and her mom distraught and in shock makes this unfathomable and inhumane," Engel told Patch.
A sign was recently posted at the park warning people of the situation. The photo has been shared on Facebook and Reddit.
The owners of the deceased dog are asking anyone with information to contact them at (516) 578-2431 or email: Bissett.susan@yahoo.com.
A 9-year-old girl died after she was attacked by a pit bull in the backyard of a Long Island home last November.
http://patch.com/new-york/longbeach/pit-bulls-attack-kill-another-dog-nassau-dog-park