MONTREAL QUEBEC CANADA - THE PIT BULL THAT INVADED THE BACKYARD OF CHRISTIANE VADNAIS AND MAULED HER TO DEATH WAS OWNED BY A ??HIGH SCHOOL STUDENT?? AND IT HAD A HISTORY OF BITING??? AND IT "SOMEHOW" GOT OUT OF HIS APARTMENT WHEN HE LEFT TO GO TO SCHOOL??? 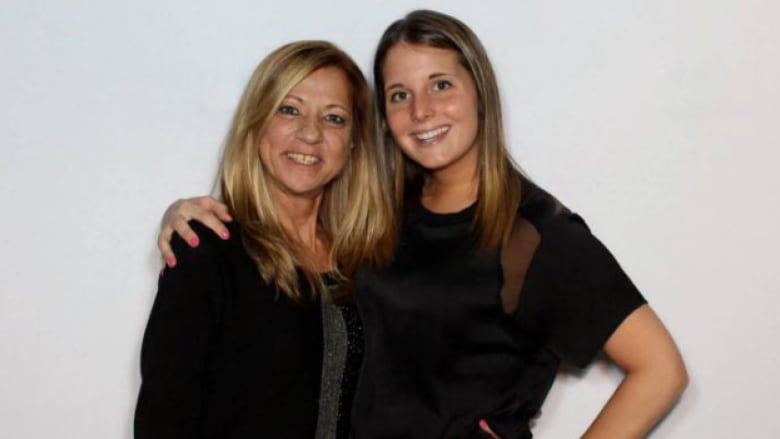 Christiane Vadnais, left, died Wednesday after she was attacked by what police described as a pit bull.

The family of a woman mauled by a dog earlier this week wants pit bulls to be banned in Quebec.
Christiane Vadnais was found dead in her Pointe-aux-Trembles backyard Wednesday after she was attacked by what police describe as a PIT BULL.
Her brother Serge Vadnais says the only way to prevent something similar from happening to someone else is to ban the breed.
"We will work … to push the government to change the law," he said. "As soon as possible, not in two years, now. We will change the law to limit the pit bull in Quebec, the same as in Ontario." 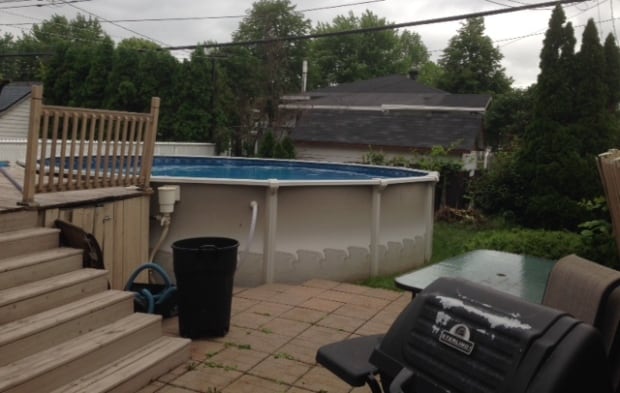 A view of the backyard in Pointe-aux-Trembles where 55-year-old Christiane Vadnais was attacked on Wednesday. (Steve Rukavina/CBC)

Pit bulls have been banned in that province since 2005.
Serge and Gaston Vadnais described their sister as someone who was full of life and always smiling.
She was one of 12 siblings. Her brothers last saw her a week ago at a family picnic.
She was a long-time and well-liked employee of Montreal's public transit agency, the STM.
Several of her co-workers were in shock after learning of her death Thursday morning, Radio-Canada reported.
Lawyer Audrey Amzallag is representing the dog owner and says ON THE DAY OF THE INCIDENT, HER CLIENT LEFT HIS DOG INSIDE THE HOUSE  ****** AND WENT TO SCHOOL.
"Was there some kind of break in the gate? All those questions are being asked to my client and my client unfortunately has no answers, because when he left for school, [the dog] was in the apartment," she told CBC's Homerun.
She also said this isn't the first time the dog attacked someone. IT HAD BEEN AGGRESSIVE IN AT LEAST TWO OTHER SITUATIONS.
"One [incident] happened when the owner had tied his dog [outside] a depanneur ... On a post and from what I understand when he came back, [the dog] was on the jacket of an individual that he doesn't know," she said.
The dog also attacked the owner's cousin, she said, because it thought the cousin was an intruder.
The Quebec government announced Thursday it is creating a working group to review, and if necessary, overhaul the regulations surrounding the dogs.
Public Security Minister Martin Coiteux said he isn't ruling out banning the dogs, but that all options will be looked at.  Montreal announced last month it would be creating regulations to deal with so-called "dangerous dogs" by 2018.
Officials have said the municipal rules will also focus on educating the public on responsible pet ownership, including proper medical care and training.
The Montreal SPCA has said breed-specific legislation gives the public a false sense of security because it doesn't work and leads to non-aggressive dogs being targeted.

I'll take a false sense of security over a pit bull mauling ANY DAY OF THE WEEK!

But please don't target non-aggressive pit bulls, because BSL doesn't work. It's more important that innocent HUMAN BEINGS DIE, than worthless non-aggressive pit bulls be targeted. Let's not forget the thousands of innocent regular dogs that are mauled and killed by pit bulls every day. BSL is just so unfair to a handful of dangerous breeds that we can't possibly do something meaningful except wring our hands and whine about how BSL gives a false sense of security!

Step aside Montreal SPCA, get rid of the nutters running your show, and let THE CITIZENS decide what they want done about dangerous breeds! You've had your chance to keep people safe, AND YOU HAVE FAILED! People before dangerous breeds!

I could hardly believe how quickly Montreal SPCA came out with their glib same-old stuff in response to yet another human death.

Okay, so it's not the job of any SPCA to care about human life. I'm sure they'd be happy to point that out with their usual smug grin, as if they've said the most clever thing you've ever heard. Now they've also degraded literally all non-pit bull animal life to the category 'cheaply expendable'. All other animals (including human ones) are just vivisection material, to be used in experiments to see whether THIS pit bull type dog will maul or kill THIS day. If it does, we still have to wait and see if it'll maul or kill ANOTHER day too. Then another.

It's time to institute BSL, mandate sterilization and secure containment of all pit bull type dogs, and anyone caught with a non-sterilized and/or non-contained pit bull type dog see that dog summarily (humanely) euthanized. No ifs and or buts, no second chances.

If that gives me a false sense of security -- I might still get bit by a chihuahua -- I'm all with you. I'll take that false security any day of the week over what's going on now.

Rip-roaring comments on this story at CBC, if anyone's interested:
http://www.cbc.ca/beta/news/canada/montreal/montreal-woman-mauled-quebec-pit-bull-ban-1.3630599#commentwrapper

How nice of the pits to provide those of us on the BSL side with even more ammunition to argue our case, what with those women in Surrey being attacked Friday WHILE folks were commenting…