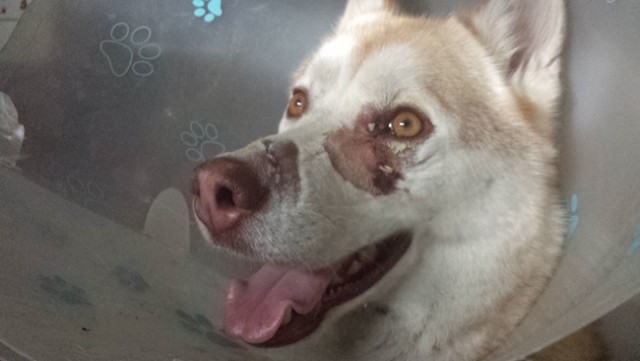 There’s been a high-profile dog attack in the Okanagan involving a PIT BULL.
A husky belonging to Peachland’s mayor is recovering from the attack, in which it had its face ripped by another dog’s powerful jaws.
Mayor Cindy Fortin says she was walking her dog, Nanook, when she heard aggressive barking. She felt relief when she saw the animal was behind a fence – however, it pushed the unlocked gate open and charged at Fortin and her pet.  Then it attacked.
“In the next instance the pit bull was biting and ripping at my dog’s face. My poor dog was screaming in pain, blood everywhere. I pushed myself between them,” she says.
“I tried slugging the pit bull in the head a couple of times, but it made no difference, so I grabbed its choke chain collar and twisted it tighter and tighter to cut off its oxygen.  It didn’t work at first, so I twisted even tighter until finally the pit bull let out a gulping gasp and with sheer adrenaline-driven strength I was able to yank it off my dog.”
Fortin held the attacking dog on one side and her injured dog on the other, while screaming for help. The owners ran to her and took control of their dog, she says.
“I consider myself extremely lucky that I wasn’t injured – physically, that is. It will take a long time to erase the images and the sounds of the attack in my mind,” she says.
“Afterwards, I couldn’t stop shaking for hours. Poor Nanook had some serious puncture wounds on his face, one very close to his left eye which would require some surgery and a drainage tube. He also had a wide strip of his flesh torn off his snout and another piece torn off the rubbery tip of his nose.”
While the physical injuries will heal, Fortin says she's unsure about the psychological scars.
"He just has a friendly, funny, goofy personality," she says. "We don't know yet if it's going to affect him."
Fortin says during the attack, she thought of Charlie the Peachland dog that was “torn apart by a (dog)” just over a year ago while out for a walk with its owner.
“His owner’s hand was broken as he fought to save him” she says. “Charlie’s injuries were so severe he had to be put down. It was a horrific image, but it actually gave me the strength and determination to defend my dog.”
She says she’s sharing the story “not to be breed-discriminate against pit bulls, but to hopefully bring about more awareness about dangerous dogs.”
She says all dogs can bite – “but let’s face it, some are more dangerous than others, especially those that are bred to be strong fighters.”
The mayor says the pit bull that attacked Nanook had no history of aggression, and added that it was it was just an accident that the gate was left unlocked.
“The dog owners did all the right things afterwards. They didn’t try to deflect the blame and took immediately responsibility. They were extremely apologetic and concerned for both me and my dog. They also paid the vet bill promptly,” she says.
"PEOPLE TEND TO SAY IT'S NOT THE DOG, IT'S THE OWNERS.  BUT THESE PEOPLE ARE RESPONSIBLE DOG OWNERS -- SO IT IS THE DOG."
She has a message to anyone thinking about getting a dog: Consider carefully which breed.
“It’s important to ask yourself, ‘do I want to risk a family member, a child, or someone else getting seriously injured or killed?’”
Fortin says Peachland council has no plans to bring in any bylaws, as the Regional District of Central Okanagan is responsible for dog control. But she did say she would like to see an awareness campaign.
http://www.castanet.net/news/West-Kelowna/168735/Pit-bull-attacks-mayor-s-dog#.V2hHj3xc4tI.facebook

If this pit bull's owner is 'responsible', that owner will now have the pit bull euthanized.

Meanwhile, Peachland needs a new mayor -- one that dares to say "It's not the owner, it's the dog, and now my town is going to ban the whole class of pit bull type dogs."

As it is, Fortin's empathy with little Charlie and her own Nanook, plus all the other normal dogs in her town, seems a bit phony. "Oh, I feel so sorry for them, but I won't do what it takes to prevent this from happening to other normal dogs. Heaven forbid the pit bull people get mad at me. Better to keep sacrificing innocent animals!"

Oh, come on, the idiot constituency is a lot bigger than you're giving them credit for. Think of the votes!

There haven't been enough attacks by pits not owned by lowlifes yet here (BC). A lot of people can still delude themselves that they're just not properly brought up. Give Wigglebutt time to edumacate them.