EASTON PA - A PIT BULL "SOMEHOW" JERKED ITS LEASH AWAY FROM WHOEVER WAS HOLDING IT AND WENT STRAIGHT FOR THE KILL ...A 7-YEAR-OLD YORKIE/MALTESE MIX BEING WALKED BY ITS OWNER 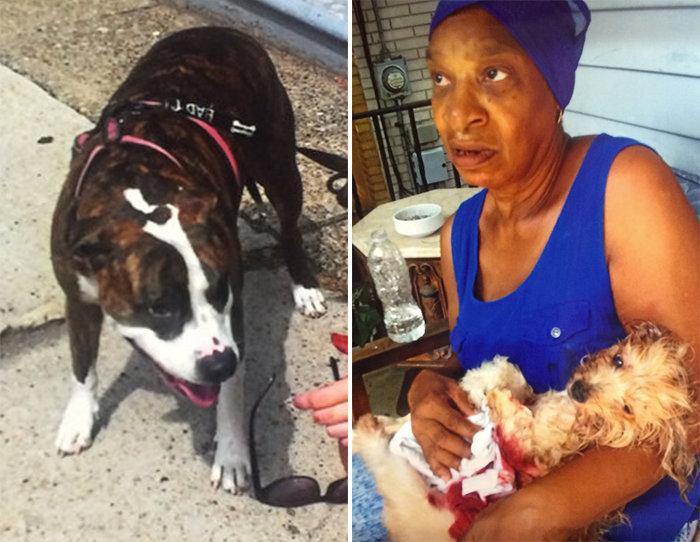 In an instant, Betty Williams went from walking her beloved pet to seeing it mauled by a neighbor's PIT BULL.
A bystander tried to save Nunu, the 7-year-old Yorkshire terrier/Maltese mix, by throwing an empty garbage can over the pit bull. But Nunu would die at a veterinarian's office about four hours later Sunday afternoon.
The pit bull's owner, who would only identify herself as "Nikki," said her dog will be euthanized and it's not fair.
"My dog is being taken to the pound today," said the South Side Easton resident Monday. "My son is losing his best friend."
Nunu's owners, Dennis and Betty Williams, believe the pit bull needs to be put down in order to keep the neighborhood safe.
"A dog that aggressive like that, you obviously can't control it," agreed neighbor Charles "Dee" Wynn. "It can't control itself. It has to go."
Betty Williams and her husband have had a difficult time eating and sleeping since the traumatic event.
"That was our little baby," said Dennis Williams, who has the blood-soaked shirt he used to try to control Nunu's bleeding.
Nunu was cremated.
"All we have now is her urn," Betty Williams said through tears.
Easton police Capt. Scott Casterline said the attack is under investigation. He said the pit bull owner is cooperating with police.
Betty Williams said she was walking the dog on Seitz Street between 10:30 and 11 a.m. Sunday when she turned the corner on Berwick Street and saw the pit bull barking and tugging on its leash.
She stayed on the South side of the street, crossing over to her side until she was a house or two away from the barking pit bull. That's when she heard the pit bull owner yell "Run!"
The owner said she lost the grip of the leash as her friend handed it to her. Williams said she ran onto the porch at 363 S. Berwick St. and froze. Nunu slipped out of her leash and that's when the pit bull attacked.
"She had my dog in her mouth and was shaking her," Betty Williams said. "I was hollering and crying."
Wynn threw a garbage can over the pit bull to try to stop it. Another neighbor grabbed the pit bull from behind and the combined effort got the dog to release Nunu.
The grieving owners rushed Nunu to William Penn Veterinary Hospital in Palmer Township, where she died about 3:15 p.m.
Nikki, the pit bull owner, said this is the first time her dog attacked anyone.
"All the kids in the neighborhood know her," she said. Nikki said she suffered cuts trying to open the pit bull's jaws to save Nunu. She agrees dog owners need to be held accountable for their pets, but doesn't think the incident warrants the death of her pit bull.
"I did everything in my power to save that dog," she said. She said she offered to contribute to Nunu's $400 in medical bills and plans to send a condolence gift to the Williamses.
Dennis Williams said Nikki should be grateful no bystanders were hurt.
"Imagine, there could have been a lot of kids out there," he said.
"If I hadn't got to that porch, (she) would have got me," Betty Williams said.
http://www.lehighvalleylive.com/easton/index.ssf/2016/08/victim_a_dog_that_aggressive_h.html

"The pit bull's owner, who would only identify herself as "Nikki," said her dog will be euthanized and it's not fair."

What's not fair, Nikki, is that you willingly obtained a type of dog that you were incapable of controlling, which ended up causing a harmless dog to lose its life.

Maybe she means it's not fair for NUnu? Or maybe Nikki is just another run of the mill selfish brat Pitbull worshiper?