CHARLOTTE NC - IT WAS POURING RAIN - THE 3 PIT BULLS DIDN'T GROWL...GAVE NO WARNING...JUST WALKED UP AND MAULED NOAH BERTRAND, 7, AS HE WAS WALKING FROM THE SCHOOL BUS STOP WITH HIS MOM

CHARLOTTE, N.C. – A seven-year-old south Charlotte boy is recovering at Levine Children's Hospital after a horrific attack by THREE PIT BULLS  while walking home from his school bus stop Friday.
Noah Bertrand and his mom were on their way home in Madison Park when the dogs came out of nowhere. The boy’s parents say if it wasn’t for quick action by their neighbors, their son wouldn’t be alive.
“All of a sudden, I heard this screaming,” said Sandy Stumpf, a neighbor. “And I run to the door and here is the mother trying to protect her child. ALL I COULD SEE IS THE REAR END OF THREE PIT BULLS ON THE CHILD."
Erin O’Hare says the scene was terrifying as she heard screams and looked out her door in the pouring rain to see three large dogs attacking the young boy across the street.
“It was like something out of a horror movie,” O’Hare said. “The mother was there trying to pull them off and the neighbor next to me was there with a broom just screaming and hitting the dogs.”
“I’ve never see anything so traumatic,” said Stumpf.
Now, Noah Bertrand has scars across his forehead after hours of surgery following the attack. Neighbors say he was walking home from the bus stop with his mom when the dogs walked up and attacked.
“And Liz [his mother] said they didn’t growl, they didn’t do anything,” Stumpf said. “They just walked up and attacked him. There was no warning, nothing.”
In those frantic few moments, the dogs tore at young Noah. As his mother covered him with her body to protect him, neighbors rallied to fight them off.
“He was screaming and crying and thank goodness he was alert,” O’Hare said. “But his face and his legs, and it’s the scariest thing I’ve ever seen.”
“I have puncture wounds on my arms and leg but that's under control,” said Liz Bertrand in one of the posts. “Trying to take things one moment at a time but dealing with some serious trauma.”
She said in another post that the family is grateful for the outpouring of love and support from friends and neighbors, and also thankful the injury was not worse.
“Noah will be ok and I know the love from family and friends will help him -- and all of us -- get there,” she wrote.
Noah’s father has kept friends updated on his recovery through Facebook. According to neighbors, the dogs have been turned over to animal control. CMPD Animal Care & Control officers were unavailable Sunday afternoon to respond to questions about the dogs' fate or if there would be charges against the owner.
The seven-year-old’s family is focused on his recovery and neighbors hope it doesn’t happen to any other child, ever again.
“I hope some kind of action is taken for his sake, and everyone else,” O’Hare said. 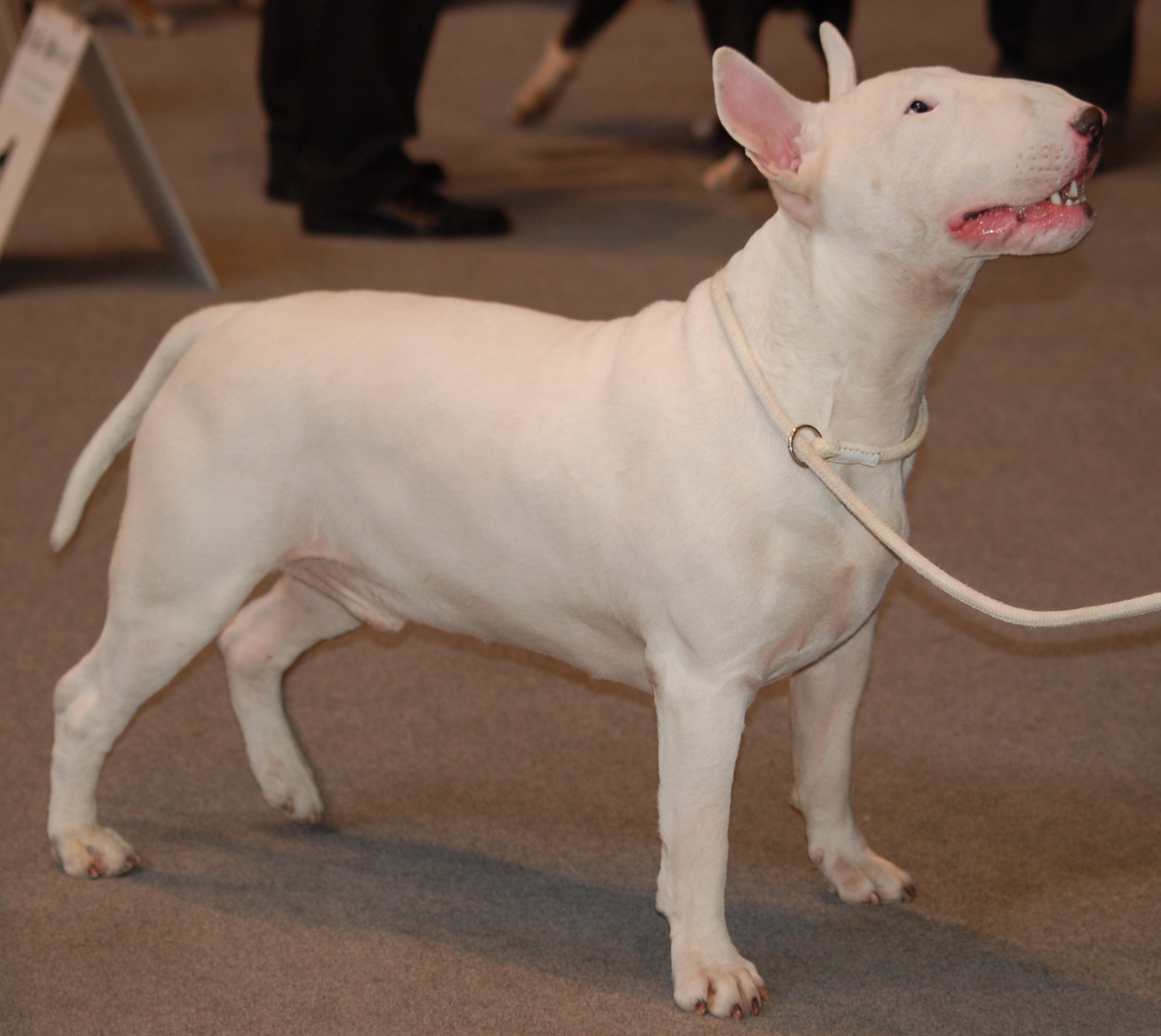 INTERNET PICTURE OF A "BULL TERRIER"

Something is wrong with Blogger Comments...I just lost 7 comments on this story! I will see if I can republish them.


Dayna Hamilton has left a new comment on your post "CHARLOTTE NC - IT WAS POURING RAIN - THE 3 PIT BUL...":

One pit is bad enough, hard to imagine trying to fight off three.


Anonymous has left a new comment on your post "CHARLOTTE NC - IT WAS POURING RAIN - THE 3 PIT BUL...":

Children everywhere are targets. Has anyone noticed how times have changed? When I was a kid, there were scary dogs, but not scary dog attacks. Now, it happens all the time.


Dayna Hamilton has left a new comment on your post "CHARLOTTE NC - IT WAS POURING RAIN - THE 3 PIT BUL...":

Yep Anon, as a kid there were two scary dogs in my neighborhood, one was a boxer, the other was a Doberman, both would bark at you as you walked by their fenced yards, NEITHER ever got out and went on an attacking rampage.

They are trying to say they are bull terriers. The witness Stumpf said they were Pitbulls. The police say they Bull Terriers. The news even attempted to change what Stumpf said in the online article, but corrected themselves as of this morning. This can be easily resolved with pictures. I guess the real reporters are still enjoying their vacation.

FTR, Bull Terriers don't act like this that I know of. I don't think most people would see a Bull Terrier, and mistake it for a Pitbull. I think they are each distinctive in their own right.

Additionally, they described the dogs as "3 large white dogs." Bull Terriers are by no means large.

The reporting of this story seems haphazard at best and the officials claim that this is a Bull Terrier, seems a veiled attempt at a white lie designed to prevent controversy over an incident they feel was isolated.


Anonymous has left a new comment on your post "CHARLOTTE NC - IT WAS POURING RAIN - THE 3 PIT BUL...":

you know the news media has changed the type of dog from pit bull to just bull terrier. I don't believe it for a minute.

Yeah Anon 8:28, it wasn't that long ago. A dog that bit a child was a bad dog and there would be a manhunt for the dogs that targeted a child, accident or not.
Now fighting dogs that don't even belong in households Are rationalized and even championed when they attack.
It's obvious dog fighting rings and animal rescues are in eachother's pockets.
Meanwhile, all the dumbasses love to put on their detective hats and mull over the reasons the tutu fur angel lost his shit and attacked the baby.

Everybody knows it's Pitbulls. Even the pit lovers know. They just want to argue and keep their pits despite the terror the inflict.

I know it doesn't look right but I got all 7 comments back on here the only way I could!!! I will try to figure out what I'm doing to lose my comments! Anyway....when we moved to Decatur 21 years ago, a neighbor had a small white dog that terrorized my family. I now realize it was a...BULL TERRIER. Ugliest meanest little dog I've ever seen. They kept it chained up or in their garage most the time but would let it out to roam every day in the evening. We had problems with dogs roaming 15-20 years ago in this city. I had never seen a dog that looked like that before with the weird shaped head. I truly believe that if that dog ever got a hold on my leg, I would have gone down and it could have killed me even as small as it was. We would stay inside in the afternoons to avoid it. Then there were 3 CRAZY SHAR PEIS that lived behind us and they roamed outside their fence more than they stayed inside it. There's about a 85% chance that "STRAIGHT-UP PIT BULLS" DID THIS TO THIS LITTLE BOY. What people call pit bulls has to be taken with a grain of salt in the beginning just like how much a medium or large-size dog weights. They are all often lumped into the catch-all term "BULL DOGS".

Pit bull, bull terrier -- same diff, all of them pit bull type dogs. You can't 'mistake' a 'bull terrier' for a pit bull because the the so-called English bull terrier IS just a pit bull -- pit lineage bred to have an even uglier nose.

Fact is, so-called EBT pit bulls act like this all the time. Check this out:

And I've never seen one that didn't start to go into attack mode if it started to get over-excited in play or cuddling.

As for being medium or large, that's relative. Most people would call a 50 - 70lb dog large. A pit fan who prefers American pit bulldogs might disagree and say 'large' only applies over 100lbs.

Too bad for the nuts, all these attacks go straight into the pit bull mauling and killing stats. The name-game expired a long time ago.