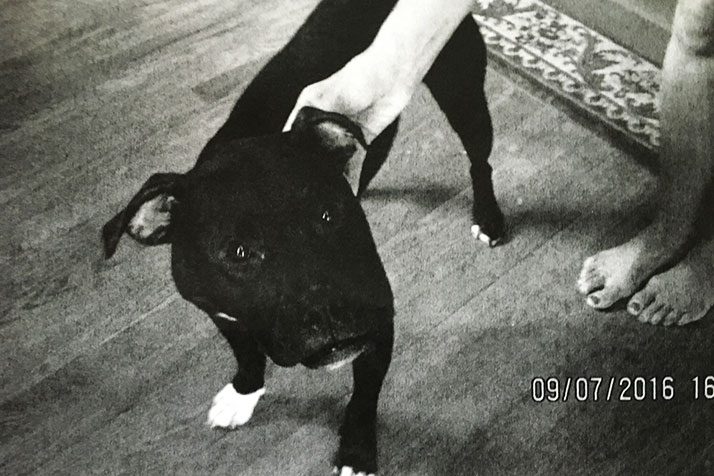 For two years, MJ the PIT BULL MIX lived undercover in Prairie Village, his owner hoping the city might someday overturn its ordinance banning his breed.

But four days before the city council voted to keep its controversial breed-specific ban in place, MJ bit a teenager visiting the home where the dog lived.

According to a Prairie Village police report obtained by the Shawnee Mission Post, MJ bit a 15-year-old Fairway girl in the face at the home in the 7900 block of Cambridge Street. The girl said she was petting MJ on the rear when he bit her.

The teen was taken to Shawnee Mission Medical Center. While the two small puncture wounds on her face were only minor injuries, the hospital reported the incident to Prairie Village Animal Control.
The dog’s owner, Jessica N. Thimmesch, 35, eventually was cited for violating the city ordinance, but not before she made one last effort to keep MJ out of trouble.
According to the police report, when Roger Blanchard, the animal control officer, came to the hospital to interview the bite victim, Thimmesch was also there.
“She (Thimmesch) told me the dog was a Lab,” Blanchard stated in the report. “I asked to see the dog, but she said her boyfriend took the dog out of the house because there were two little kids in the house.”
Since it was the Friday before the Labor Day weekend, Blanchard agreed to stop by Thimmesch’s home the following Tuesday, Sept. 6, to see the dog and see if his rabies vaccination was current. That Tuesday, as it turned out, was also the day the Prairie Village City Council was scheduled to consider a proposal to overturn the pit bull ban. Perhaps MJ would win a reprieve?
When Blanchard arrived that day, he tried to contact Jessica twice.
“Both times, no one answered the door although her car was in the driveway,” Blanchard reported.
The next day, Wednesday, Blanchard came back. The City Council had voted 7-5 the night before to keep the pit bull ban in place. And this time, he connected with Thimmesch — and MJ.
The owner told him she had been living in Prairie Village for two years.
“She realized soon after she rented her house that pit bulls were illegal in Prairie Village,” Blanchard reported. “She was able to get the owner of the house and her neighbors not to divulge that she had a pit bull.
“She also concealed the identity of the dog to me until after the Council vote in hopes that the ban would be overturned.”
It also turned out that MJ was overdue on his rabies shot. The dog was taken to Great Plains SPCA for the vaccination and will have to be reexamined in 45 days for any signs of rabies.
In the meantime, a city official familiar with the situation said the owners are planning to relocate out of Prairie Village. Police added MJ’s case will be sent over to the Prairie Village Court for any further action.
Attempts to reach Thimmesch for comment Wednesday were unsuccessful.
http://shawneemissionpost.com/2016/09/15/prairie-village-woman-cited-for-owning-pit-bull-that-bit-15-year-old-girl-54665

Wow. You mean to tell me that a pit bull owner actually lied to cover her pit's ass? That's never happened before, right?

Way to go pittie!! Keep earning your bad reputation, keep that ban in place! So did the owner get any punishment for lying and trying to block the investigation???

I tell ya, nutters really are a special breed. They don't follow the rules, they have people "conceal" the truth for them, otherwise known as lying, they don't vaccinate their pit bulls, they don't answer the door so as not to suffer the consequences.

Isn't it funny how this nutter knew that there was a vote, and was intentionally hiding out so that if the ban was overturned, she could keep her vicious pit bull?

Nutters don't know how to follow the law, but they sure have the intelligence it takes to game the system.

This is why we NEED BREED SPECIFIC LEGISLATION!