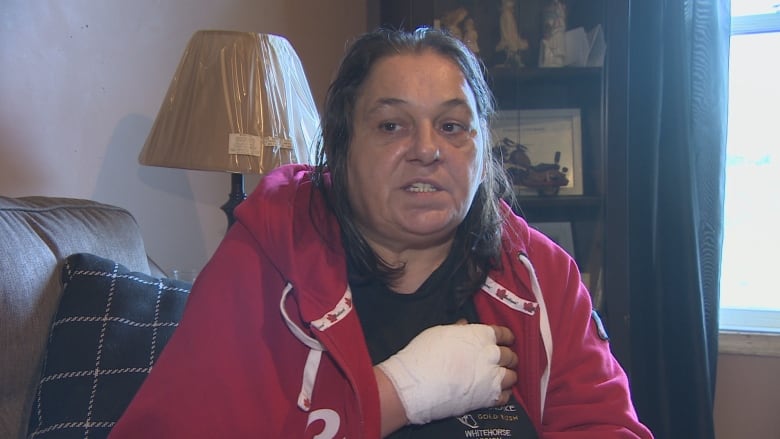 A Regina woman said she had to act quickly when a dog, that was familiar to her family, appeared to attack a child without provocation.
"She bent down to pick up a glove off the floor [and] the dog went after her," Ida Peters said Sunday, two days after the attack. "And then I jumped in and saved my granddaughter."


Peters said the girl is feeling better and is out of hospital, adding that "her head is still sore."
"He was shaking her like a rag doll," Peters added.
"The dog … took her by the ponytail and shook her, and I stepped in," she said. "I took a stick and tried to crack the dog on the head but … he just bit me harder."
Peters needed 32 stitches to close the wounds on her hand and said she may need a skin graft.
"I finally pried him off of my granddaughter and … she ran to the neighbour," she said. The people in that home helped the child until police and ambulance crews arrived.
Peters said police and animal control officers were able to remove the dog from the basement. She believes a tranquillizer was used to make the animal docile.
Peters said the dog had been with the family since it was six weeks old and she was unsure why the animal bit the girl.


"I don't know why the dog turned on us," she said, noting the dog is three years old and had never attacked anyone in the past.
"They trained it to be good with all of us from day one when they got him," Peters said. "He was OK for a long time, until [Friday]. He just came after us … I don't know what flicked him."

A 52-year-old woman and her granddaughter, 7, were taken to hospital in Regina Friday after being hurt by a dog. A relative told CBC News that the woman needed 45 stitches to close wounds on her hand and the child was bitten in the head.
It happened over the noon hour at a home on the 500 block of Pasqua St., northwest of the downtown. 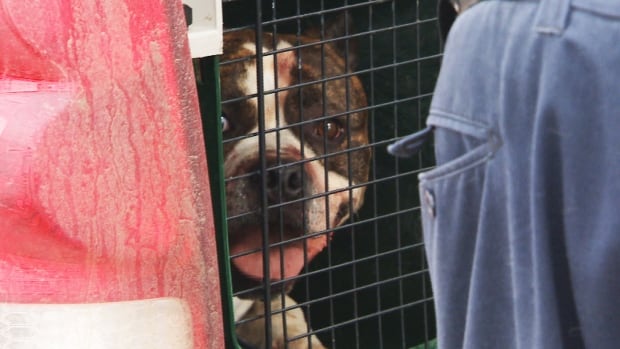 The dog, which a resident at the home said was a PIT BULL, was taken away by animal control officers. Police estimated the size of the animal at 60 to 80 pounds, or 27 to 36 kilograms.
A police officer at the scene, Cpl. Colin Magee, said officers provided assistance to EMS crews and animal control.
Magee said any follow up would be done by animal control and added police were not contemplating their own investigation.
"There isn't any criminal activity here, as far was we're aware," he said.
Brandon Rus lives at the home but was out when the episode occurred. Before he knew the extent of what happened, he said he knew the dog to be very gentle. 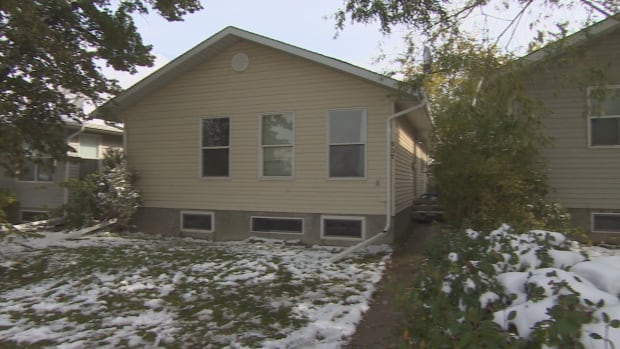 "He's like a big sweet heart," Rus said. "He doesn't come out very much because it's cold and the snow … he sits by the window."
When contacted later, after he learned about the injuries to his relatives, Rus said was very concerned.
After visiting family in the hospital, Rus learned that the child was bobbing her head from side to side and the dog may have been attracted to her waving ponytail.
"So he went to go yank at it and he must have got the back of her head," Rus said, describing bite marks on both sides of the girl's head.
He said the grandmother was hurt when she went to open the animal's jaws seeking to release the child.
Rus said the dog belongs to his uncle, who has been away.
Rus also described several spots of blood in the home, including in the living room, kitchen and basement where the dog was apparently tranquillized before being taking away.
"It's a mess in there," he said, adding that the family is determined to euthanize the animal.
"It'll probably be either put down or never enter the house again," Rus said. "Grandma even told me, there's no more animals allowed in the house."
A notice was posted to the door of the home indicating the dog had been seized and would be quarantined for a while.
http://www.cbc.ca/news/canada/saskatchewan/two-taken-to-hospital-after-regina-dog-attack-1.3796672

There really and truly must be some kind of IQ test you have to fail to be a pit bull fan. I mean, besides having a personality disorder.

It's amazing what these idiots come up with -- "Poor pittie just wanted to yank the pony tail, then the poor thing forgot how to open its jaws once it had gripped the child's skull."

Do they really believe the shit they come up with? If so, the human race is doomed.

So, one more “gentle dog” inflicts horrifying injuries on a family member for a reason that's completely incomprehensible to anyone but a pit owner. Just another day in Maulerville, pop. everything with a pulse. I hope whoever is going to hear Montréal's appeal of the ban suspension sees this story.
—AMinYVR

So what's the excuse for it then attacking grandma? Oh, wait. It's a pit bull. That is the only answer.

I had a pit bull yank my braid. I was sitting on a picnic bench. I wasn't waving it around. I had my back to the pit bull and I felt something bang into me, and grab my braid. Scariest moment of my life. I didn't know what was happening. Thankfully, it stopped pursuing my braid.

No other breed of dog has done that to me, EVER! Pit bulls don't have boundaries like other dogs do. Pit bulls see humans as walking chew toys.

AND NOW WE KNOW the real story! A child picking up a glove off of the floor is enough to send a pit bull into attack mode.

I love how the nutters try and piece it all together. Not sure what happened? Raised it from 6 weeks old to be good with all of us. Never attacked before.

DID YOU KNOW IT WAS A PIT BULL? THIS IS EXACTLY WHAT PIT BULLS DO!

HURRY UP! GET ANOTHER PIT BULL AND SEE WHAT HAPPENS!