STATEN ISLAND NY - EUGENE CHARLES AND HIS WIFE ANNE FILED A CIVIL COMPLAINT AGAINST THE OWNERS OF THE PIT BULL "CAESAR" THAT RIPPED HIS BELOVED "CHARLIE' INTO LITTLE PIECES AS THEY WERE TAKING A WALK...THE MEAT GRINDER WAS SUPPOSED TO BE PUT DOWN...BUT IT DIDN'T HAPPEN!!!


STATEN ISLAND, N.Y. -- Caesar, the pit bull accused of fatally mauling a Chihuahua six months ago in Grant City recently gained a death-row reprieve thanks to an agreement between his owners and the city Health Department.
But the fallout over the tragic episode is far from finished.
On Monday, Eugene and Anne Charles, the owners of the Chihuahua, named Charlie, sued Caesar's masters, Douglas and Kristina Panattieri, alleging their pet was killed during a "violent, vicious and unprovoked attack" on May 17, according to a civil complaint.

Not only was Charlie fatally injured, but Eugene Charles suffered "severe, serious and permanent" injuries when Caesar bit him in the hands, arms and legs, alleges the couple's civil complaint. 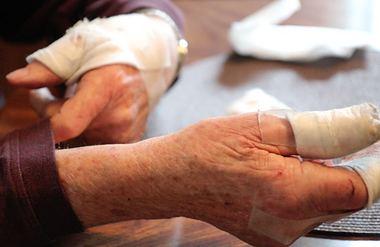 The Panattieris should have known Caesar "was vicious, had a vicious nature and disposition and had previously bitten or attacked people and animals," the complaint contends.
Filed in state Supreme Court, St. George, the suit seeks unspecified monetary damages.
Besides physical injuries, Eugene Charles, who is 78, alleges emotional and psychological damages - as does his wife - over the attack.
After the episode, the couple told the Advance that Charlie's loss was particularly devastating because they had brought him home five years ago to aid them as they grieved the loss of their son, Gary, who died in 2011 after heart surgery.
John P. Connors Jr., the Charles family's lawyer, declined comment, citing the pending litigation.
Richard Bruce Rosenthal, the Queens-based attorney who represented the Panattieris in their case with the Health Department, said he no longer represents them.
Attempts to reach the couple were not immediately successful.
According to Advance reports, Eugene Charles said he and Charlie, who weighed 10 pounds, were returning home from their usual 7:15 a.m. walk.
They were walking on North Railroad Avenue and began crossing Midland Avenue at the corner, when, Charles said, he spotted the pit bull running from behind his owner's house and out through the driveway onto North Railroad.
Charles said he scooped up Charlie and was able escape the pit bull's first two lunges. But on the third try, the larger dog, which, he believed weighed 85 pounds, managed to lock his jaws around Charlie's midsection and hind legs, he said.
Charles said Caesar knocked him to the ground and dragged and rolled him and Charlie over the asphalt.
The pit bull wouldn't let go of Charlie until he was dead, even though Good Samaritans and the pit bull's owners ran over and tried to restrain the animal, Charles said.
"Charlie lasted maybe two minutes, that was it," Charles told the Advance days after the attack. "The pit bull was thrashing Charlie back and forth like he was a little rag doll. He just ripped Charlie apart."
Charles said he suffered puncture wounds on his forearms and injuries to his shoulders and knees from being dragged, and was taken by ambulance to Staten Island University Hospital, Ocean Breeze.
The civil complaint alleges the Panattieris were negligent in failing to have their dog "properly guarded, restrained, muzzled or confined" outside their North Railroad Avenue home.
In addition, the defendants failed to post signs or warn Eugene Charles of "the presence and propensities of the dog," alleges the complaint.
Caesar has been accused of killing at least one other dog and a cat, according to published reports.
After the incident, the Health Department determined Caesar, who had been placed in a city shelter, should be euthanized, deeming him to be a dangerous dog.
The Panattieris fought the decision.
In a suit filed in Manhattan state Supreme Court, the Panattieris contended Caesar "does not have a known vicious propensity and has no previous unjustified attack on a person which caused serious physical injury or death."
They further maintained any bites Eugene Charles suffered resulted from his own animal biting him when he picked up Charlie to take him to the vet after the incident.
Caesar ultimately staved off euthanasia, on the strength of a recent agreement between the Panattieris and the Health Department.
Afterward, Douglas Panattieri told the Advance Caesar would be allowed to return home under several "stringent stipulations." They include further training and a good citizen certificate from the American Kennel Club.
The dog would be required to wear a muzzle, and the Panattieris would need to install a new automatically-closing safety gate at their home, he said.
Panattieri said then media reports didn't "reflect the facts."
"Caesar is a good dog," the Advance quoted him as saying. "He's very good with adults and children."
Pannatieri also said his family's "hearts go out to" the Charles family over the attack and the loss of their dog.

Sickening. Someone I know recently lost their elderly pit bull which was eulogized as a gentle animal, never a snap - leaving out that one time he broke down the fence for the sole purpose of murdering the neighbor's dog. People like Caesar's owners have no morals. Any number of kills will be "justified" in their minds. They will continue to ignore the bodies that pile up around the neighborhood because no one else's pets matter. They should realize they can't pull that crap about him not having a record of aggression again, not after all this publicity. His prey drive is in over-drive. He's a large carnivore. Good luck getting a good citizenship certificate to stop bloodlust. How many kills before even soulless idiots realize it's not a pet?

Okay, this story is making my blood boil.

"In a suit filed in Manhattan state Supreme Court, the Panattieris contended Caesar 'does not have a known vicious propensity and has no previous unjustified attack on a person which caused serious physical injury or death.'"

DISCLAIMER: Caesar killed at least one other dog and a cat, and Charlie is dead, but it doesn't count because they weren't PEOPLE. GOT IT!

"They further maintained any bites Eugene Charles suffered resulted from his own animal biting him when he picked up Charlie to take him to the vet after the incident."

"Pannatieri also said his family's 'hearts go out to' the Charles family over the attack and the loss of their dog."

WHAT HEART? The same heart that made sure your killer dog got to live so it can kill again?

Kristina Panattieri, you are as ugly as your hideous pit bull. You have no soul, no heart, no morals, and NO COMPASSION! I hope you receive your richly deserved Darwin Award!