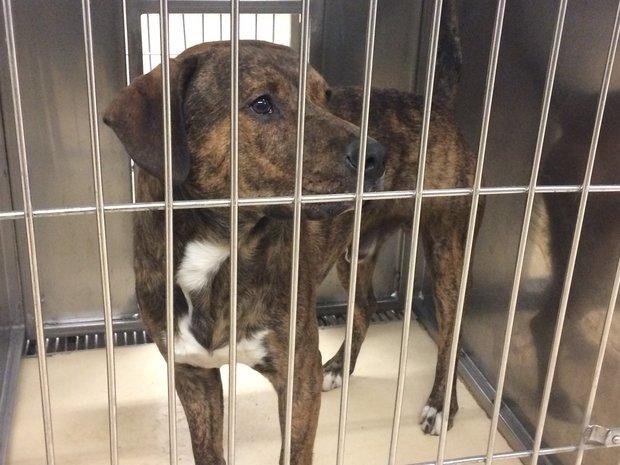 A normal, domesticated dog will quit after one bite. That's not what happened Monday when two dogs attacked a child, a teen and two adults.
"A normal dog bites a kid one time; they do not continue to attack and go for the back of their head," said Lisa Stoffel, director of Saginaw County Animal Care Center.
"Something went really wrong in this situation. It was a full-on attack."
It was Martin Luther King Jr. Day. There were no school classes, so two siblings around 2:30 p.m. Jan. 16 decided to take advantage of that by visiting their friends down the road at a home in the 3300 block of Binscarth Avenue.
The pair, a 15-year-old brother and his 7-year-old sister, had just stepped through the door when it's believed the youngest one, frightened or excited, let out a squeal at the sight of the TWO PIT BULL-GERMAN SHEPHERD-MIX DOGS, Stoffel said.
Stoffel believes the noise startled the dogs and, when the girl bolted toward the back door, the dogs' prey mode kicked in.
It's not clear which of the dogs, both of them a little more than a year old, attacked first, but they both joined in, biting the girl's legs, arms, back and neck, Stoffel said.
The brother, his mother and the owner of the dogs all then tried to get the dogs off of the child and were also bitten in the process, Stoffel said. Shortly after, the dogs were contained.
The four of them were transported to area hospitals for treatment of the puncture wounds they received, Stoffel said. The girl suffered the worst of the attack and received an unknown amount of stitches, she said.
Everyone was released from the hospital, Stoffel said. The attack, she said, could've been far worse.
"Had the parents not been present, we could've had some serious or fatal injuries," she said.
All parties were shaken by the incident, Stoffel said. The siblings had been over at the house before, but the dogs had never bitten them nor anyone, she added.
"They were nice dogs, family dogs, never had bitten anyone before," Stoffel said. "It's a sad situation."
The responding animal control officer, Trish Barnes, said the dogs were well-fed, in good care and hadn't been abused, making the attack all the more freakish, she said.
The dogs, named Louie and Frankie, are brothers both a year-and-a-half old. Currently they're being quarantined at the Saginaw County Animal Care Center, being watched for signs of rabies and aggression.
So far, signs of neither have been displayed, Stoffel said.
Barnes said the dogs were well-behaved and let her pet them when she took them away from the home.
"I truly think something triggered these dogs," she said.
As for them being part pit bull, Barnes said she doesn't believed that factored into the situation.
"I don't think pit bulls are dangerous," she said. "Anything with teeth can be dangerous, and anything can trigger a dog, or any animal, really. Pit bulls just have a bad name."
What happens next to the dogs is up in the air. Right now, Stoffel said it doesn't appear the owners will take the pair back.
With a full-on attack, however odd in their history, Stoffel said the dogs can't be put up for adoption, as it'd risk public safety. The pair will likely be euthanized.
The Saginaw County Prosecutor's Office could not be reached for comment about whether charges were being considered in the attack.