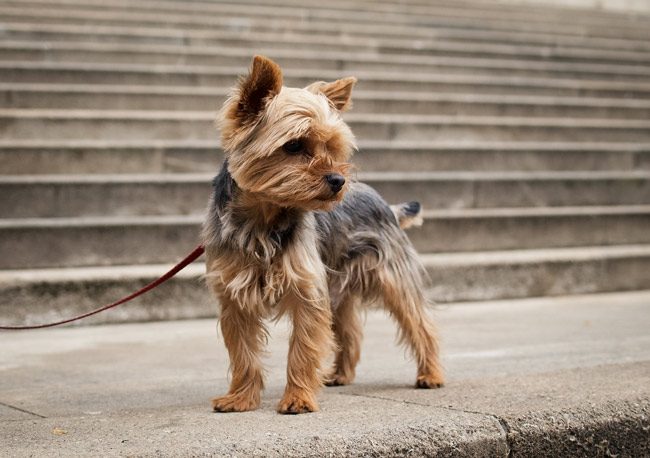 Sunday morning (Feb. 19) before 9, James E. Bennett, a 79-year-old resident of the Canopy Walk complex in Palm Coast, was walking Gidget, his Yorkshire terrier, inside the complex, as he usually does in the morning.  Within moments, Bennett and his 7-year-old Yorkshire were attacked by another dog, a LABRADOR/PIT BULL MIX.

The attacking dog, Wilson, was owned by Helena Karnani, 58, and Neel Karnani, 60, also residents of Canopy Walk.
Helena Karnani told Flagler County Sheriff’s deputies she and her husband had been walking their two dogs in the complex when Wilson’s leash broke. Wilson, she said, “began running around and working himself up as he usually does,” according to a sheriff’s incident report. Neel tried to catch him several times. But Wilson, a 2-year-old dog, was large and fast, and Neel wasn’t able to catch up to him.
Bennett was on a sidewalk with Gidget in the same area. As soon as Wilson saw the pair, the dog charged them. Bennett saw the dog coming his way so he immediately picked up Gidget and held her in his right arm. Wilson, however, jumped (Bennett is about 5’4’’), and “while still in motion from running,” the report states, managed to bite Bennett on his right arm and Gidget on her back.
Bennett tried to fight off the dog by hitting Wilson with his free hand. But the dog was so aggressive and large that it kept lunging at Bennett, doing so four times and finally knocking Bennett off his feet. At that point Bennett lost his hold of Gidget. The small Yorkshire tried to get away. She didn’t get far. Wilson caught up and mauled her, killing her.
By the time Neel Karnani was able to get control of his dog again, the damage was done. (A witness in the parking lot was able to confirm the series of events.)
Gidget suffered from numerous lacerations and puncture wounds to her neck and back. She was dead by the time a deputy arrived at the scene. Bennett suffered severe wounds to his right arm. He was taken to Florida Hospital Flagler, where medical personnel said the injuries would require numerous stitches, with an X-ray still pending to determine if there’d been further injury.
While deputies were at the scene investigating the incident, Bennett’s wife, Sandra, suffered an anxiety attack, lost consciousness, and was taken to the hospital by a second ambulance, though by then she’d regained consciousness. The hospitalization was a precaution.
An animal control officer reported to the scene, taking affidavits from participants and photographing the scene, as well as Gidget, before securing the dead dog pending what disposition or services Gidget’s owners would opt for.
Neel Karnani voluntarily surrendered Wilson to the humane society to be euthanized.
https://flaglerlive.com/105031/pitbull-attack-canopy/

1)  1-17 LOGAN BRAATZ - 6 - ATLANTA GA - The boy was walking to his school bus stop with other children and some adults when 2 loose pit bull dogs began attacking them - It was reported that Logan was eviscerated, his friend Syrai Sanders was scalped and another child was injured - Although neighbors came running with sticks, knives and whatever they could find, the attack was deadly and swift and the dogs continued to circle and attempt to attack - The dog owner said his dogs had a fence but "SOMEHOW" got out.

2) 1-17 SKYLAR DEAN JULIUS - 2-MONTHS-OLD - SAN MARCOS TX - The father was caring for the infant girl while the mother was at work - He fell asleep for around 20 minutes and when he woke up the baby had been mauled by the family German Shepherd they had had for over 8 years and it was reported that the dog "had never shown aggression before".

3) 2-13 LOUISE HERMIDA - 75 - QUEENS NY - The elderly woman was mauled by her large dog that had been adopted almost 6 years ago. The breed is said to be a Mastiff or a Mastiff/Great Dane mix.  Neighbors say as many as 10 dogs lived at the apartment.  Her 39-year-old son, who has autism, attempted to put the dog in its cage and he was bitten on the leg.

4) 2-16 UNIDENTIFIED 5-YEAR-OLD BOY - CLARKSVILLE TN - Emergency personnel were called at 8:20am on a Thursday morning to a report that the Family's two English Mastiffs reported to be about 6-months-old had mauled the child. The boy died from extensive injuries.

6) 2-28 VALENTIN HERRERA - 76 -  LINCOLN HEIGHTS CA - He was mauled by 2 pit bulls on February 2 while walking his small dog Dodger - Dodger was killed - He was knocked down during the attack and could have further received head injuries .......

7) 3-23 JASE PATRICK FOHS -  8-MONTHS - LUSBY CALVERT COUNTY MD - The family pit bull latched on to the child and was still attacking when officers arrived only minutes after the call - An officer had to shoot the dog to stop its mauling but the baby died.

8) 4-6  CECILLE SHORT - 82 -  AND HER LITTLE DOG - OKLAHOMA CITY OK - Cecille was taking her pet dog for a walk when they were attacked by 2 large pit bulls - A passerby in a car saw the attack and called 911 - Police arrived and shot one and hit the other with their vehicle because they could not get out of their vehicle but it was too late for the victims!!!  Witnesses describe the elderly woman as being almost decapitated.

9) 4-26  MAURICE BROWN - 60 - DAYTON OH - Neighbor's heard screaming and crying for help after 4am and dogs barking and began calling 911 - Police arrived and had to shoot a pit bull that apparently broke free from a chain in a backyard and attacked the man - 4 dogs were taken from the property.

10) 4-27 LISA GREEN - 32 - UPPER MACUNGIE TOWNSHIP PA - Neighbors heard the woman being attacked by her 3 1/2-year-old male pit bull/boxer mix on the rear deck of her home - They offered the dog ham and it didn't stop the attack - They hit it with a stick and it crunched the stick - Then an off-duty police chief  who lived nearby was called and he shot the dog in its leg and that finally stopped the attack but the woman had suffered great blood loss and was pronounced dead at the hospital - It was reported that she had had the dog for 2 1/2 years - Neighbors reported that the dog was biting on her neck.

10) 5-1  JANE MARIE EGLE - 59- ASHEVILLE BUNCOMBE CO NC - A call was made to 911 about an aggressive dog and when deputies arrived they found Jane Egle unconscious and appeared to have animal bites - the aggressive dog would not let anyone inside the home - They finally subdued the animal and it was reported it died - Seven dogs were taken from the home - 6 Boerboels and 1 Great Pyrenees - According to a relative, her Facebook and Instagram she bred these very large aggressive dogs for sale - Behavior analysts evaluated the dogs and recommended they be put down due to their aggressiveness - But the Great Pyrenees will not be put down and it was determined it was not a threat to society.

11) 5-8  KAMIKO DAO TSUDA-SAELEE - 6 MO OLD GIRL - LAS VEGAS NV - First Responders were called to a home around 1pm where a 6-month-old baby was fatally mauled by the family's pit bull -  The mother was home with the baby and rode in the ambulance with the child - The child was later pronounced dead at the hospital - It was reported that the baby had been playing in her walker when the pit bull was let in and attacked her.

2-24) JAMES E. BENNETT - 79 - He was walking his small Yorkie Gidget on Feb. 21 inside the Canopy Walk Complex as they usually did in the morning - A pit bull/lab mix was also being walked and got away from its owner and attacked them - Bennett was knocked down by the large pit and was bitten severely on his arm - The pit took Gidget and she was dead before police got there - He was hospitalized and his wife became unconscious from an anxiety attack and was also hospitalized - He died from a heart attack on the 24th - The pit mix was euthanized.


3-18)  JOHN BRUNO - 5 - WARRINGTON TWP PA - John was playing in the snow on Wednesday, March 15, when his family looked out and saw him down on the ground with the family dog tugging at his scarf around his neck - He was unresponsive and first responders gave him CPR and he was rushed to a hospital - He died on Saturday, March 18 - Investigators report that he suffered ligature strangulation from the  HOUND MIX  pulling on his scarf.

There is no way in hell anyone can say they are a dog lover or an animal lover and own a shit bull.