CASSOPOLIS MI - A GRANDMOTHER WAS PLAYING WITH HER 2 GRANDCHILDREN IN THE YARD WHEN "SOMEHOW, ACCIDENTALLY" THE NEIGHBOR'S PIT GOT OUT AND WENT FOR SOMETHING TO TRY AND KILL...THE GRANDKIDS...LITTLE ARIAL, 2, LOST AN EAR, HAS NO NERVES ON HER LOWER FACE AND COULD REQUIRE SURGERIES FOR THE NEXT TEN YEARS!!!

(AP) A young girl from Michigan is in the hospital after she was horribly mauled by a  PIT BULL  on Sunday.  It’s a nightmare her family says could've been prevented if the dog was chained up.

The two-year old girl is at Riley Hospital for Children and likely, won't get to go home for months.
It started as a quiet Sunday evening on a country road east of Cassopolis.
“I was up on the swing sitting, and I heard Anthony scream 'there's a dog, there's a dog’,” Jennifer Hansford said.
Hansford's two grandkids were playing on a trampoline, when a neighbor's dog wandered into the yard.
“He gets off the trampoline and starts running, that's when the dog started running after him,” Hansford said.
Hansford says she tried to grab the dog, which had already torn into her grandson's arm.
“Arial got off the trampoline because she was scared, went running across the yard and then the dog got ahold of her,” Hansford said.
An attack Hansford says WENT ON FOR 20 MINUTES before help arrived as she was trying to save her granddaughter.
“I screamed my head off, trying to get anybody to help me, but there wasn't really anybody here,” Hansford said.
Cass County sheriff Richard Behnke would not talk on camera, but neighbors say they've had issues in the past with the dog known as "Kryptonite". That dog was taken away by animal control and is now in quarantine for ten days, according to captain Tom Jacobs. He says they haven't yet decided what will happen to the dog, but the county prosecutor is considering criminal charges. That's some comfort to the family, but they say right now, they're more worried about Arial. 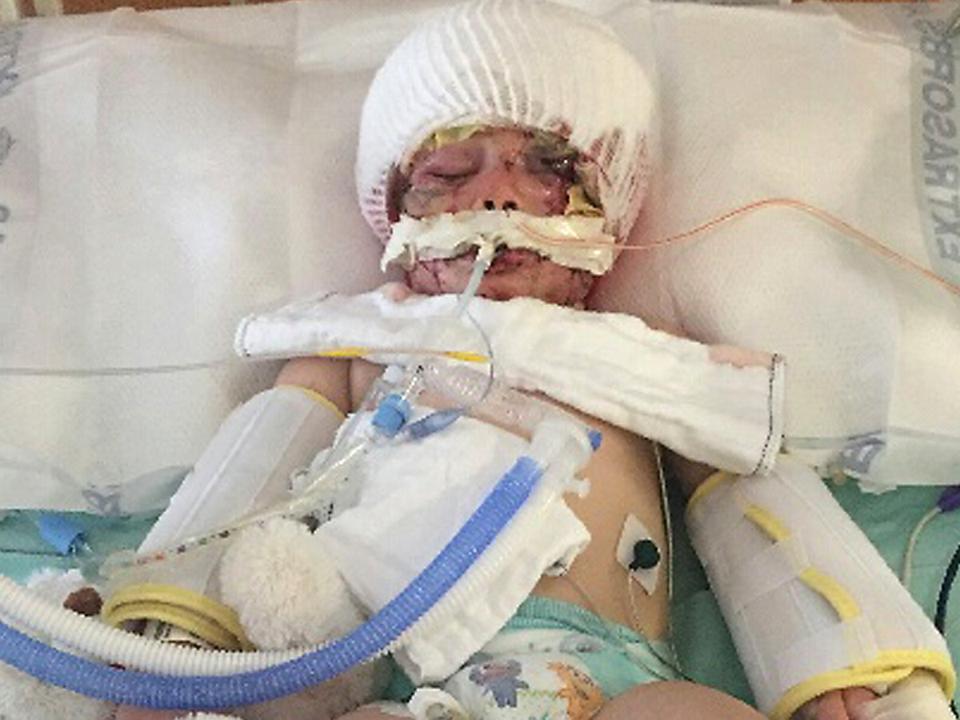 “She won't be the same girl. She'll be scared of dogs,” Hansford said.
There was a bark at the door, but no answer at the dog owner's home.
“If you're going to put them outside, make sure they're on a chain or a leash or something,” Hansford said.
Fortunately, doctors say Arial has stabilized at Riley.
HER FAMILY SAYS ARIAL HAS LOST AN EAR, HAS NO NERVES ON HER LOWER FACE, AND COULD REQUIRE SURGERIES FOR THE NEXT TEN YEARS.
Hansford and the older child were taken to a Niles hospital for treatment. The 2-year-old was airlifted to a South Bend hospital with severe head trauma and later moved to Riley Children's hospital in Indianapolis.
Police say the dog was a stray a neighbor had taken in.
MLive reports the neighbor's brother inadvertently released the dog from a garage and it entered a yard and attacked the two children and then Hansford.