MONCTON, NEW BRUNSWICK CANADA - AN ELDERLY COUPLE SAY THEY DO NOT FEEL SAFE GOING INTO THEIR OWN YARD AFTER A PIT BULL MIX MAULED THEIR DOG "RASCAL"...THE PIT WAS QUARANTINED AT ITS HOME THEN GOT LOOSE AND INTO THEIR YARD AGAIN! 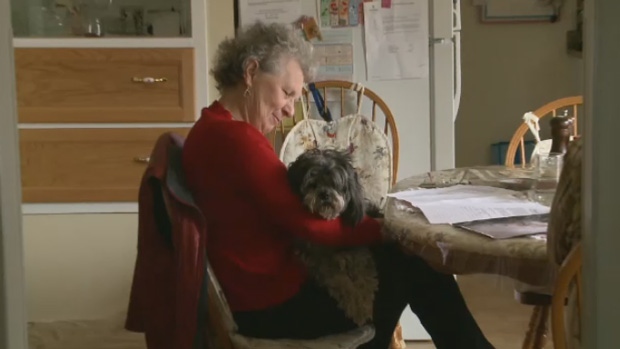 A 74-year-old Moncton woman and her small dog are recovering after being attacked by a  PIT BULL MIX in their front yard earlier this week.
Carol Guest said it took three people to pull the larger dog off hers.
“It was awful. You had to be there to see how bad it was,” Guest said.
“I kind of pushed him aside, grabbed the dog and started beating on its jaw until it let go,” said Carol Guest's husband, Wilfred.
Guest says her dog, Rascal, had to spend the night at an animal hospital to treat his wounds, while his owners would require stitches, shots and antibiotics.
Four days later, they're still nervous about going back to their usual routine.
“No way do I feel safe going out there,” Guest said. “I'm really nervous. If I thought I could get away with it, I'd walk with a stick.”
CTV Atlantic’s efforts to contact the owner of the larger dog were unsuccessful, but the Guests say she has apologized several times and offered to foot the bill for the medical expenses.
“Had to take her coat to the drycleaner because there's blood up the sleeve and all over it, pair of sneakers ruined because of blood, and our medical bills for him alone are well over $1,100 so far,” said Wilfred Guest.
The Guests say the apology doesn't cut it. On Friday, they started a petition to remove the dog from the neighbourhood. More than 30 people have signed so far.
“Who's to say it's not going to attack again? And who knows if it's going to be a kid this time?” said Carol Guest.
SPCA executive director Dave Rogers says spring can be a stressful time of year, especially for pets that haven't had a lot of interaction with other animals over the winter.
“Even good dogs have bad days,” said Rogers. “If they're not leased, at least in their own yard, you have make sure, particularly this time of year too with fences heaving rising and lowering, dogs can be pretty quick escape artists and get out,” Rogers said.
In the meantime, the dog remains under a ten-day quarantine in its home. Since CTV Atlantic spoke with the Guests on Saturday, the dog in question has got out and into the yard again.
According to animal control, if the dog does get loose one more time, it will have to be taken to the SPCA for the remainder of the quarantine period. After that, results of the investigation will be passed on to city bylaw enforcement.
While the Guests aren't sure they want to see the animal euthanized, they don't want it in the neighbourhood, fearing for many children in the area and their own peace of mind.

This part is nauseating: SPCA executive director Dave Rogers says spring can be a stressful time of year, especially for pets that haven't had a lot of interaction with other animals over the winter.“Even good dogs have bad days,” said Rogers.

So the SPCA director thinks the reason the pit bull attacked the small dog and its elderly owner is because it's spring time? Pit bulls do this year round and as someone who works in animal control he probably knows this at some level but will not admit it publicly. Pit bulls: a significant number of the breed like to kill their fellow dog, also capable of explosive, unprovoked aggression towards humans. He wants to protect the reputation of the breed his organization promotes as family pets. Pit bull themselves are doing a fine job of letting the public know just what sort of dogs they are with the daily attacks. I am glad to hear in this case Mrs. Walsh and Rascal survived. It could have gone much worse.

The dog has already adequately demonstrated its vicious nature. It shouldn't get a second chance. The fact that the dog didn't even make it through ten days of quarantine without escaping again is a sure indication the owner is negligent and shouldn't have a dog. The SPCA's attitude is disturbingly callous. I feel sorry for this lady and her neighbors.

If the pit bull mix is not good in the Guests' neighborhood, then what neighborhood would the pit bull mix be good in? One without dogs, cats, wildlife, livestock, and people. Since no neighborhood like that exists, the only answer is to euthanize the pit bull mix that has attacked already. Otherwise, some other animal or person is going to pay with their life. I vote that the vicious pit bull mix pays with its life. Call me heartless, but a tiny little needle hurts a lot less than having flesh torn off of one's body.

And please, don't ever play pass the pit bull, where the history or known aggression is lost along the way. It's not that hard to do the right thing. It's about time that the idiot pit bull owners lose their precious pit bulls, instead of everyone else suffering that fate.