ATHENS AL - NATIVE ALABAMIAN AND RETIRED LIEUTENANT COLONEL FROM THE ARMY SIGNAL CORPS NOW LIVES IN MADISON WITH HER BELOVED SERVICE DOG "GABBY"...GABBY'S LEG WAS MANGLED WHEN SHE WAS ATTACKED BY A PIT BULL OUTSIDE AN ATHENS RESTAURANT 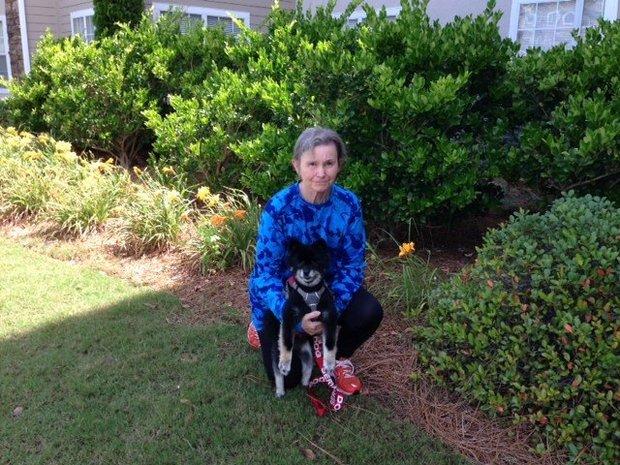 Marilyn McAllister knew what she wanted to do when she graduated from Sheffield High School in 1976. She wanted to go to Notre Dame, so she made sure she got an ROTC scholarship. She wanted a military career, and she got that, too.
After serving her country, she came home to Alabama. Now her life centers around doctor's appointments for herself and caring for her beloved service dog, Gabby. Neighbors in her apartment complex in Madison would never guess that this diminutive woman, walking with her Toy Pomeranian, is a retired lieutenant colonel with 22 years in the Army Signal Corps, where she was one of the first women paratroopers, with over 150 jumps to her credit.
While stationed at Fort Bragg, she was moved up to jump master, and fell through the night sky with 80 pounds of equipment on her back. She can demonstrate how to land with her knees and feet together to lessen the pressure. Still, she says she's two inches shorter than she used to be.
Her size didn't stop her from serving with distinction in Bosnia, Haiti, Somalia, Saudi, Iraq, and then stateside during Hurricane Andrew. In more than two decades in the service, she's seen war close up. She's felt the ground shake when scud missiles destroyed buildings; she's seen lifeless bodies on war-torn streets, she's been exposed to chemical sites and sarin gas and insecticides. It was part of the job, she says.
She'd planned on an Army career, but she hadn't planned on getting Gulf War Syndrome, a cluster of medical problems including breathing difficulties, IBS, chronic fatigue, and, in McAllister's case, a severe choking problem while eating. After retirement, she carried a knife with her in case she had to perform an emergency tracheotomy on herself.
Fortunately, she never had to. Instead, she got a rescue dog from Colorado, trained by the ski patrol to dig under the snow after an avalanche and clear the throat of a skier buried under deep snow. "Choking alert" dogs use their tongue to clear a passage, something people may find distasteful, but it saves lives.
Gabby's only had to perform this procedure once when McAllister choked during a meal, but she's trained to follow the command whenever she's needed. She's also a fine companion, staying at her mistresses' side when PTSD nightmares come or vision problems occur.

So it was natural that McAllister took good care of Gabby when she was attacked by a PIT BULL outside of an Athens restaurant a few months ago. Before her surgery, her right leg dangled uselessly and is still not fully healed.

Because of her trauma, she developed a dog's version of PTSD, so McAllister took her to Island Dog Training Center so she could get used to being around other dogs again.
Now they are two wounded warriors, helping each other get through the day.
"I'd do anything for her," McAllister says. "We're always together."
They are together on trips to Honduras, where the healing waters of the Caribbean wash over McAllister's skin wounds as she swims. Gabby follows closely behind in a small kayak. They are together when McAllister eats lunch with other vets or runs errands.
Mcallister wants to make the most of the time they have together. She knows that Gulf War vets have limited life spans; it comes with the territory. She also worries about cutbacks in benefits for those whose war wounds don't heal, and hopes the administration will keep its promise to take car of disabled vets.
She urges them to call the VA to ask about getting a service dog. "If you need one, get one," she says. "It can change your life."
http://www.al.com/living/index.ssf/2017/06/alabama_veteran_and_her_servic.html

The pit bull that attacked Gabby was a service-therapy-nanny-entitled-hero-emotional-crutch pit bull. So that makes it okay.