EDMONTON, ALBERTA CANADA - ANOTHER SWEET NORMAL PET DOG MURDERED BY A LAND SHARK PIT BULL...A YORKIE-POM "KALI" HAD BEEN WITH HER FAMILY 10 YEARS BUT HER LOVING MOM COULD NOT HOLD ON TO THE LITTLE DOG AND SAVE HER 5-MONTH-OLD BABY FROM THE MEAT GRINDERS!!!


Danielle Leclerc cradled her five-month-old daughter in her right arm on Wednesday night, while she held the leash for her dog Kali in her left hand.
She was in the courtyard of her townhouse complex in north Edmonton, when two large dogs from a neighbour's property raced toward Leclerc and attacked her five-pound dog, a Yorkie-Pomeranian that she's had for 10 years.
"I was trying to bend down to pick [my dog] up and I had her by the harness ... I couldn't get my hand underneath her because I had the baby in my right arm," said Leclerc, breaking into tears. 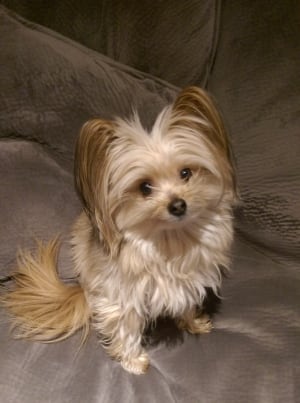 "I grabbed her by the harness and the two dogs pulled her out of my hand and they just ripped her apart. I was screaming for help," she said, still clearly distraught one day after the attack.
A crowd of neighbours soon arrived to help the young mother, but nothing could be done for Kali, who was left bloodied and twitching on the grass. The dog died soon after.  Leclerc said she decided to get some fresh air around 10 p.m. that night because it was so hot and stuffy in her townhouse, near 87th Street and 144th Avenue.
She thought her daughter was getting too hot, so she scooped up the baby and grabbed her dog for a short walk.
The gate to a neighbour's yard was open and the dogs raced out as soon as they saw Leclerc, she said. There were two children in the yard at the time, but the dogs' owner did not show up until after the attack.
Leclerc said she felt powerless to protect Kali from the two dogs, identified by animal protection officers as AMERICAN STAFFORDSHIRE TERRIERS, ONE OF SEVERAL BREEDS COMMONLY KNOWN AS PIT BULLS.
"My heart breaks so much for Kali but I can't even imagine what would've happened if it was my daughter," she said.
An animal control officer arrived later that night and seized the dogs, which will stay at the Animal Care & Control Centre for up to 21 days.
Officers have applied for a Dangerous Dogs Act order. That would force the owners to care for the dogs under restrictions, such as having a specific type of pen in the yard and muzzling the dogs while in public.
"We can issue fines and we'll be investigating and determining which course of action with enforcement we'll be taking," said Trena MacGillivray, acting co-ordinator with animal control.
"There could be fines, there could be warnings. It just depends on what the investigator determines."
A fine could result in a court proceeding, where a judge could impose higher penalties, MacGillivray said.
Leclerc said she's speaking out because she wants dog owners to take responsibility for their pets.
"If you're going to own this breed of dog or a pit bull dog, or any dog that's deemed aggressive, you need to put in the time and the work to train them — because if it wasn't my dog, it could have been my baby," she said.
"I feel like nothing is going to happen and that's not fair.  Leclerc said the dogs were part of a litter of puppies born in the complex last fall.
She said the tiny puppies once escaped from the yard and she helped pick them up as they scattered across the communal yard.
The dogs' owner eventually arrived the night of the attack and immediately tried to leave the property with them, Leclerc said. The owner eventually tied the dogs to a pole in the middle of the courtyard until officers took them away.
Leclerc said she is wondering how she can get some justice for what happened. She said she was told she'd have to hire her own lawyer to seek compensation, such as to help pay for the cremation of Kali.
"She was just so happy and so spunky and so full of energy," she said. "You'd think she was maybe a year or two. She didn't look old or act old.
"The saddest part is coming home and knowing my friend isn't there."

This is what nutters stand for. They refuse to accept that pit bulls are dangerous to other dogs. So they fight to keep pit bulls as pets, while normal dogs are executed without warning, provocation, or reason. I could not imagine watching a tiny, harmless, adorable, sweet little dog get savagely ripped apart because pit bulls happened to be nearby.

This mom is lucky her daughter was spared, but so unlucky that her dog was killed.

PIT BULLS DO NOT DISCRIMINATE, THAT'S WHY WE HAVE TO!