BARRIE ONTARIO CANADA - MORE PIT BULL DRAMA...RESPONSIBLE PIT OWNER WHO "USUALLY WALKS AROUND THE CITY WITH HER PIT WEARING A MUZZLE" SEEMED RELIEVED TO HAVE OFFICERS FIRE THE 7 SHOTS IT TOOK TO STOP HER ADOPTED PIT FROM ATTACKING HER 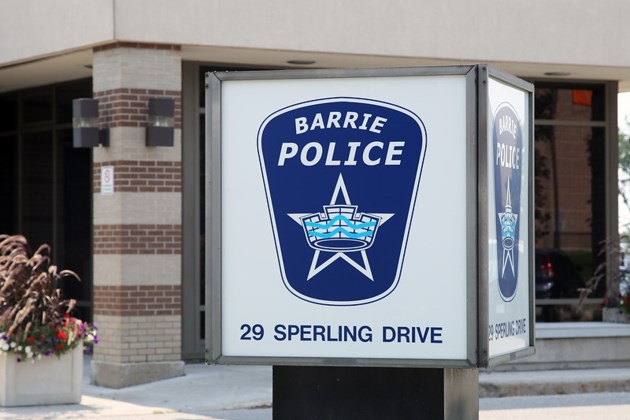 Barrie Police fatally shot a dog that was attacking its owner and refused commands to stop.
Police were called to the Steckley-Gooderham Funeral Home at 30 Worsley Street at 3:13 p.m. Saturday by a passerby who called 911 after hearing a woman screaming for help and saw the attack.

Police say the dog, who belonged to the victim, was repeatedly and viciously biting both of the woman's arms and not releasing to voice commands or diversions.

Police were unable to subdue the dog and as a result multiple shots were fired, police said.
"She (the victim) was conversing with the officer. I don't think she was shocked by the outcome of it and I think she was very grateful because at that point she herself knew that was the only way the attack was going to stop," said Rodgers.

The dog appears to be A PIT BULL OR BULL DOG OR A MIX, according to police, and the owner told them it was a rescue and she wasn't sure if it was rescued from a fighting or an abusive background.  "The owner had alluded to the fact that there was some aggression issues before that," Rodgers said.

Mary Fletcher Harris was walking by and witnessed the entire incident.
"It was horrific. I've never seen anything like that in my life," said Fletcher Harris, still shaken several hours later.

"When I saw it (the cruiser) go in I could see a dog behind one of those ornamental pillars and it looked like it was thrashing.  My first thought it was two dogs fighting. The police immediately exited their SUV and an officer immediately drew his weapon and fired. I don't know whether he fired first at the dog or just away from the dog to frighten it off the woman," Fletcher Harris recounted.

"Then the dog started to run down the sidewalk and the officer fired, could be four, five times at it. It fell but it wouldn't stop. It tried to get up so I turned my head because I knew they were going to finish the dog off.  There was a couple more shots, maybe seven in total and the dog stopped moving."

Police say the dog quickly succumbed to its injuries on scene.

Due to injuries received from the dog attack, the woman was rushed to Royal Victoria Regional Health Centre with serious, non-life threatening injuries.

"They stood her up after a while and walked her to the gurney so she wasn't needing to be carried. I didn't see any blood on her or the dog or the ground," Fletcher Harris said.

Fletcher Harris works downtown and says the victim and her pet are regular fixtures.

"She'll be upset about her dog, I'm sure. I've seen her around and I think that's her companion. Probably for safety reasons but I guess for some unknown reason he turned on her," she said.

"She keeps it muzzled all the time so I guess it's a little dangerous.  I don't know why it would've attacked her but it did."

Fletcher Harris was rattled by the incident.  "I've never seen police draw weapons and fire.  I've never heard gunshots before so it was pretty wild scene down there."
But she says she fully understands why police shot the animal.  "I think they had to do that. For sure."

Rodgers said police had no choice.  "This was the only option. It's unfortunate but at the end of the day it's about the safety of everyone else and the officers," Rodgers said.

Save the dangerous dogs, until the dogs start getting busy on the nutters!