LITTLE GRAND RAPIDS, FIRST NATION, MANITOBA CANADA - DONNELLY ROSE EAGLESTICK, 23, WAS FATALLY MAULED ON SATURDAY, MAY 13, BY ABOUT 30 DOGS AS SHE WAS WALKING HOME FROM A FRIEND'S HOUSE

A 23-year-old woman found dead on a Manitoba First Nation over the weekend was mauled by dogs, according to her family.
The body of Donnelly Rose Eaglestick was found outside on the ground Saturday morning, surrounded by about 30 DOGS, by workers at the water treatment plant in Little Grand Rapids First Nation — a remote fly-in community 270 kilometres northeast of Winnipeg.
​A spokesperson for the RCMP, who are investigating the death of Donnelly Rose Eaglestick, said he was still awaiting the autopsy results.
But her aunt and uncle, Doris and Roderick Mayham, said they were told following an autopsy that Eaglestick died from injuries suffered during the mauling.
Doris Mayham, who raised Eaglestick, said she was a loving, caring mother of a five-year-old girl.
The couple suspects Eaglestick was walking home from a friend's house the morning she died.
"There's no foul play or anything. There's just basically wounds that were inflicted by the dogs," said Roderick Mayham. "Time of death was between 1:30 and 3:30 in the morning. But she had been found, 6:30 in the morning, by people going to work." 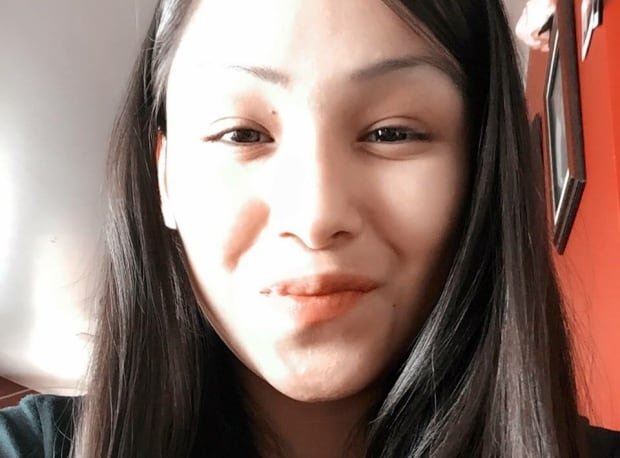 He said his niece was a fun, loving person who never held a grudge, and was always happy to help him out by babysitting.
Little Grand Rapids Chief Roy Dunsford told CBC News that people in the area heard barking early Saturday morning.
​"There's people living on the other side of the road, [from] where they found [her] and they say they heard dogs barking, barking, barking at 3 in the morning," he said. "They thought the dogs were barking at a bear."
Dunsford said the community of about 1,000 is struggling with the news.
​"She was a good young woman," he said. "People are really shocked with what's really happened."
​​"I was just crying," he said, adding Eaglestick used to babysit his children.
Community members had planned to light candles and offer prayers Sunday evening, Dunsford said.
"I can't stop crying," said friend Millie Jasmine Pascal. "I can't believe she's gone ... she was a nice person. Loving and caring."
http://www.cbc.ca/news/canada/manitoba/suspicious-death-young-mother-little-grand-rapids-1.4114727


Manitoba RCMP have confirmed that a young woman whose body was found surrounded by dozens of dogs died from an animal attack.
Donnelly Rose Eaglestick, 24, of Little Grand Rapids First Nation, was found dead Saturday morning at a construction site for the community's new water treatment plant.
Family told CBC News that Eaglestick's body was surrounded by roughly 30 stray dogs. She is believed to have died between 1:30 a.m. and 3:30 a.m., her uncle, Roderick Mayham, said Sunday.
After a "thorough" investigation, forensic investigators and police officers with Little Grand Rapids RCMP determined Eaglestick died from an animal attack and her death was not suspicious, a police news release said.
One dog was shot by police after acting aggressively toward officers, RCMP said.

"A young mother was taken from us far too soon. The community is in a state of shock, a state of sadness," said Kewatinook MLA Judy Klassen, interim leader of the Manitoba Liberals in the Manitoba Legislature Monday.
Eaglestick leaves behind a five-year-old daughter, now an orphan. The girl's father died previously of exposure.


"We need to work together so that every Manitoban feels cared for in the wake of a tragedy," said Klassen.
Health Minister Kelvin Goertzen responded by offering condolences and promising to send additional resources to the remote, fly-in community.
"We stand by willing to offer assistance," Goertzen said.e, people are being asked to keep a close eye on children.
"We have to watch our little ones," Leveque said.
Little Grand Rapids Chief Roy Dunsford said Sunday residents nearby heard dogs barking around 3 a.m. the morning Eaglestick died, but thought the commotion was due to a bear.
Eaglestick's family remembers the young mother as a fun, loving person who never held a grudge.
"I can't believe she's gone ... she was a nice person. Loving and caring," said Eaglestick's friend Millie Jasmine Pascal, on the weekend. "I can't stop crying."
Little Grand Rapids First Nation, home to about 1,000 full-time residents, is a fly-in community located 270 kilometres northeast of Winnipeg.

This is so sad and terrifying at the same time. No one could take on 30 dogs. What a horrible way to die.

I read several articles about this and listened to a long piece online from a Canadian public radio program. Locals authorities and a veterinarian were saying at this point a cull was in order to protect the safety of the residents. Animal rights groups were arguing that trapping and sterilizing the feral dogs was sufficient; no dog should die to protect human life, I suppose. This poor young woman died a painful frightening death all alone. Her little girl now an orphan. People will continue to be in danger if packs of dogs remain.

I love dogs. Even if they have gone feral, they are deserving of humane treatment. Public safety and the protection of human life comes first. Dogs were domesticated in the first place to be protectors and companions.