SANDWICH MA - A 100-POUND PIT BULL MIX "SOMEHOW" BROKE FREE FROM ITS COLLAR AND ATTACKED AN ELDERLY SAMOYED BEING WALKED ON A LEASH - THEN THE MEAT GRINDER REDIRECTED ON THE WOMAN WHO HAD BEEN WALKING HIM BUT COULD NOT CONTROL HIM!!! 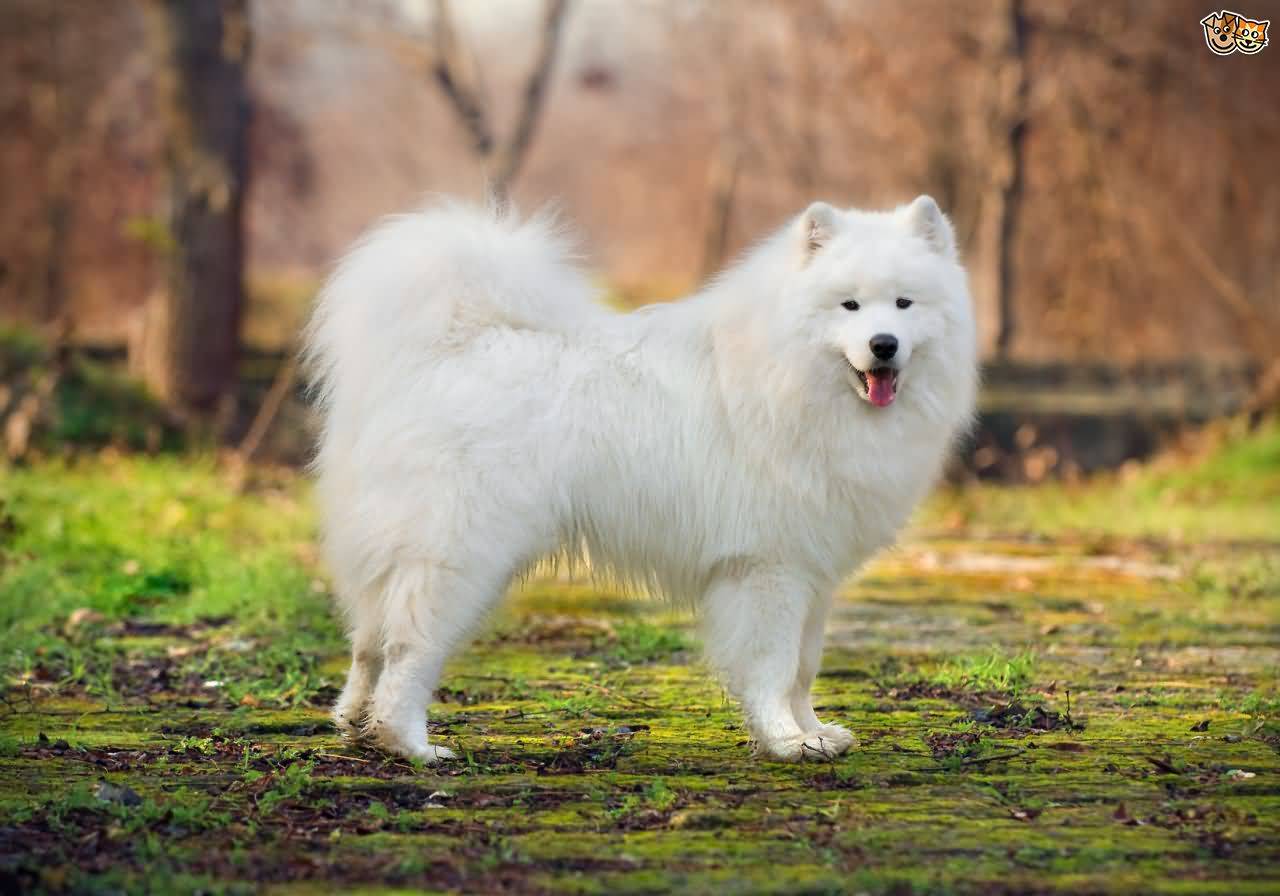 Internet picture of a Samoyed
As Sandwich officials prepare for their first dangerous dog hearing in at least 10 years, neighbors of the  PIT BULL MIX  that mauled a woman and shredded her left hand last month say they want the dog removed from their Forestdale neighborhood.
Meredith Fortier, of Deep Wood Drive, said she was surprised the dog, Bubba, was immediately returned to his owners two doors down from her after the Sept. 5 attack on Elizabeth Hiatt, 62, also of Forestdale.
“We have lots of young children” on the street, Fortier said. “We have lots of people walking dogs. That was a pretty serious attack.”
“There’s a whole lot of angry neighbors wanting to know why the dog is still there,” said Wayne Cobb, also of Deep Wood Drive, whose pet Samoyed received minor injuries in the attack.
Sandwich Animal Control Officer John M. Pimental said the black-and-white 4-year-old pit bull mix did not appear to present a danger when officials arrived on the scene.
“The dog was very docile. He was inside the car, wagging his tail,” said Pimental, who said Bubba’s owners have been ordered to keep the 100-pound dog muzzled when he goes outside until further notice.
“It was a dog-on-dog attack,” Pimental said. “The woman got in the middle of it.”
Witnesses, including Hiatt’s daughter, Brittany Korsh, describe a different scenario.
On the afternoon of the attack, Hiatt was walking Bubba on a leash as a favor to the dog’s owners, Clifford Gardner, 80, and his wife, Edith, who Hiatt said are friends of hers from church and are in frail health.
She had walked Bubba daily for a few weeks and was accompanied by her daughter, her granddaughter in a stroller, and a friend from out of town.
But this time when Bubba saw Cobb walking his dog, Klondike, on the other side of the street, he broke free of his collar and lunged for the 13-year-old Samoyed, holding him on the ground by his neck.
“I immediately got on my knees and started pounding Bubba to let go,” Cobb said.
When that didn’t work Cobb said he put both his hands in Bubba’s mouth and tried to pry his jaws open.
“I released enough pressure so my dog could get loose,” Cobb said.
Klondike got up and ran away, with Cobb in pursuit, creating a gory spectacle for children getting off the bus after their first day of school, neighbor Dyan Craddock said.
″(Cobb) ran by with his arms dripping with blood,” Craddock said. “He warned us not to go that way. It was frightening.”
The attack, a few yards from the Gardners’ driveway, was not over.
“When (Bubba) finally released, that’s when he attached to me,” Hiatt said. “He went straight to me.”
“It was such a terrifying thing,” Hiatt said. “He bit me on my right arm, my left arm. He also bit me on the face.”
Bubba fastened on her left hand, grinding it so hard her flesh came loose in flaps, Hiatt said. X-rays at Boston Medical Center, where she spent three days, showed her bones were pocked with bite marks and the long bones in her forearm were both fractured.
“This is an attack that went on for 10 minutes. He wouldn’t let go and he wouldn’t let go,” Korsh said. “They’re treating it like a dog bite. He mauled her.”
Korsh said she tried to call Bubba off her mother and then resorted to pulling his leash and kicking him, while a good Samaritan drove up and put Korsh’s baby and stroller in her car.
The attack ended only when Clifford Gardner, alerted by Hiatt’s friend, came up and threw his body over Bubba, Korsh said.  Animal control officials who arrived released Bubba to the Gardners, prompting a number of phone calls and emails to town officials from concerned neighbors, according to complaint reports obtained by the Times through a public records request.
“There’s 19 children on our street under the age of 13,” and Halloween is coming up, Craddock said. “I love my dogs, but I love human life a little bit more.”
Hiatt and the Gardners will get a chance to tell their stories during the hearing at 10 a.m. Oct. 25 in the basement of the Sandwich Council on Aging building at 270 Quaker Meetinghouse Road, Pimental said.
The Gardners “are an elderly couple, and they would like to keep their dog,” Pimental said. “There are certain procedures you have to go through.”
Clifford Gardner said his attorney advised him not to comment.
David J. DeConto, director of the town’s Natural Resources Department, said the dangerous dog hearing would be the first held in the town in the 10 years he has been with the department.
The hearing, being held at the request of the Hiatt family, will be presided over by Police Chief Peter Wack and is open to the public.
The last serious dog attack in Sandwich to be reported in the press occurred April 5, 2014, at a residence on Salt Marsh Road, when a male pit bull-boxer mix named Drewski ripped the lower lip of a visiting woman off down to the jawline.
The dog’s owner surrendered him to animal control, which returned him to the Worcester Animal Rescue League. The league’s executive director, Allie Tellier, said Drewski has been adopted out once again, with no problems “whatsover.”
Bubba’s attack last month left Hiatt with about 100 stitches and numbness in her right ring and little fingers, Hiatt said. She said she has to wait before starting physical therapy on her left hand, which looked “like ground beef” at first.
The Gardners are victims, too, Hiatt said. She said she was glad Clifford Gardner was able to come to her rescue, and that Bubba missed her tendons and nerve junctions.
“I just think about what could’ve happened had we been around the corner,” Hiatt said. “I would have really been in trouble.”
http://www.capecodtimes.com/news/20171011/neighbors-object-to-dogs-return-after-sandwich-attack

What is a frail 80-year-old couple doing with an out of control 100 pound pit bull? Terrorizing the neighborhood, to put it lightly.

I cannot believe the callous response from those in power in Sandwich, MA!

'The dog was very docile. He was inside the car, wagging his tail,' said Pimental, who said Bubba’s owners have been ordered to keep the 100-pound dog muzzled when he goes outside until further notice."

Those comments totally discredit what just happened to the victims! Let's blame the victims and completely ignore a pit bull that broke loose to attack another dog legally walking down the street, and then redirecting the attack on a human!

"The last serious dog attack in Sandwich to be reported in the press occurred April 5, 2014, at a residence on Salt Marsh Road, when a male pit bull-boxer mix named Drewski ripped the lower lip of a visiting woman off down to the jawline.

The dog’s owner surrendered him to animal control, which returned him to the Worcester Animal Rescue League. The league’s executive director, Allie Tellier, said "Drewski has been adopted out once again, with no problems 'whatsover.'”

It's lovely that Allie Tellier is willing to risk someone else's well-being with a known dangerous pit bull boxer mix. One that has ripped someone's lower lip down to the jawline. It astounds me how much nutters are willing to overlook as abnormal dog behavior, but normal pit bull behavior.

I wonder when nutters are going to be deemed mentally insane, and we finally get to ban pit bulls nationwide? The fact that pit bulls need advocates to prove they're normal, proves pit bulls are not, and nutters know it.

The only people that misunderstand pit bulls, are nutters.

I loved this comment from the AC, "The Gardners “are an elderly couple, and they would like to keep their dog,” Pimental said. “There are certain procedures you have to go through.”

The Gardners should not have a say anymore after their dog tried to kill a dog and a person. Why the fuck does an elderly couple need or want a 100 lb pit bull???! Oh, they don't! Someone needs to tell them to get a small dog.