BELLE GLADE, PALM BEACH COUNTY FL - 3 PIT BULLS CAME INTO ELIJAH SMITH'S FRONT YARD AND CHOMPED DOWN ON THEIR BELOVED "LOKI" - "I THOUGHT MY WIFE AND CHILD WERE GOING TO DIE" 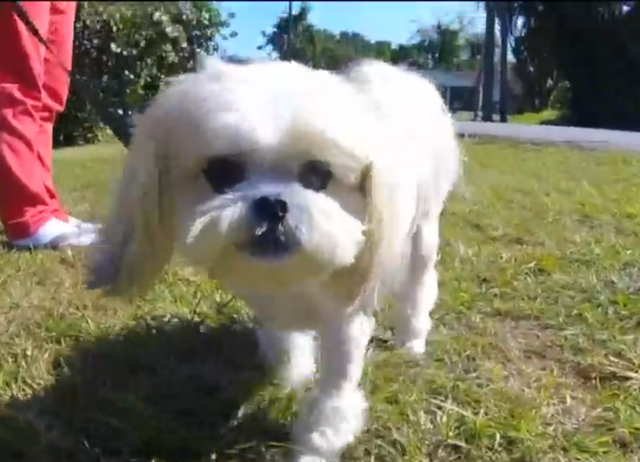 It’s a heated war of words between Belle Glade neighbors, and a Shih Tzu named Loki is caught right in the middle.
Owner Elijah Smith says his neighbor’s  3 PIT BULLS  came into his front yard and attacked Loki Tuesday night.
“They were trying to kill my dog, and I don’t know why because we’ve never provoke those dogs,” Smith says.
Smith says his entire family stepped in to pry Loki away.
“I really thought my wife and child were going to die,” he says.
A deputy responding to the incident gave him news he wasn’t expecting.
“I said to him so even though we're in our yard, and three massive pit bulls attacked a Shih Tzu, we can get in trouble for that? He was like ‘yeah’.”
Smith says the deputy told him he can be found partially at fault because Loki wasn’t on his leash.
Thursday, we were there as Animal Care and Control interviewed both neighbors,  before the 3 pit bulsl were removed by Animal Care and Control.
The owner’s family was visibly upset.
Smith says his family is even worse off tonight.
His wife is in the hospital after a bite from one of the pit bulls caused an infection.
The bruises on Loki are even more life threatening.
“He was just scared, and sore, he was running a high fever and he was sick,” he says.
Facing the prospect of paying hundreds of dollars for potentially life saving treatment for Loki, he’s not sure what’s next.
He's hoping for help for his dog - from the attacker's owners, or from anyone willing to step in.
“They’re happy creatures, and they trust us to take care of them, and I really feel like…I let my dog down."
Animal Care and Control say despite what Smith was told, an owner can have their dog off their leash on private property.
If the dog was on public property, it’s a different story.

Yeah, I was going to say, that officer is WRONG! I mean, of course I'm not in their jurisdiction, but why wouldn't a property owner be able to have their dog on their own property without a leash? That makes absolutely no sense!

If I were Elijah Smith, I would start a civil suit, against the neighbor and the deputy.

The injuries to Loki could well be life threatening. Although the pitbulls' owner is responsible for vet bills, Loki's owner likely will be unable to collect. The same, unfortunately, is true of the medical bills. I am so grateful that I don't live next to pitbulls.

I'm calling bull shit on the deputy. If you are in your own yard there is no reason for your dog to be on a leash unless that dog has bitten someone and been deemed dangerous by the courts.