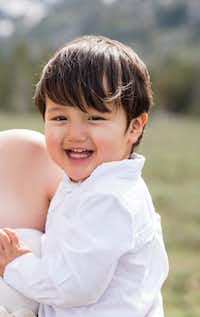 A Colleyville couple said their son was mauled by a rescue dog at an adoption event held at Klyde Warren Park in Dallas last Saturday, and they're fighting for the dog to be euthanized.
Allis Cho said she was with her 2-year-old son, Luca Romero, petting dogs at the Dallas Pets Alive adoption event when a PIT BULL-LABRADOR MIX  attacked Luca.  "It was awful," Cho said.  "It literally dragged him to the ground and would not let go.  It was flailing him around.

"Leslie Sans, executive director of Dallas Pets Alive, declined to comment on the specifics of the incident due to a pending investigation but said the rescue agency is reviewing what happened to prevent it from happening again. She said the volunteer-based organization screens all of its animals before bringing them to adoption events and before they are adopted out.
Cho said she was told the dogs were friendly and that they were welcome to pet them. She said her son, who loves dogs and is used to playing with their German shepherd, pet several dogs, including the one that later attacked him. It had been friendly toward him at first.
But as Luca was walking back toward the leashed pit bull mix, the dog lunged at him and attacked. Cho said the dog pinned her son to the ground by sinking its teeth into his right arm and chest and wouldn't let go. Bystanders rushed in to help, she said.
"Four to five large men had to come in and literally pry the dog off of him," Cho said. "One of the guys was punching the dog and the dog wouldn't let go of him. It seemed like forever, but I'm sure it was just a minute or two."
Her husband, Alan Romero, was at the food trucks nearby when it all happened. He said authorities were called, and an ambulance took their son to the emergency room at Children's Medical Center Dallas, where he received several stitches on his arm and chest.
The boy's parents said he is doing well but has had some nightmares and is nervous around dogs now.  "What we want is for this dog to be euthanized," Romero said. "It was an unprovoked attack. This dog is dangerous. He mauled a little kid and will probably do it again."
Ed Jamison, who recently became director of Dallas Animal Services, said the dog is in the middle of a 10-day quarantine period, during which it will be examined by Deborah Thorne, a DAS veterinarian.
It was Thorne, considered the city shelter's bite specialist, who determined Lamb of God, a yellow Labrador sentenced to death after biting a boy in the face, was a "ticking time bomb" with "multiple personalities."
Jamison said the city will need to determine whether the dog is dangerous, and, if so, whether it can be returned to Dallas Pets Alive. If the city determines that the dog caused serious bodily injury to the child, it could also ask a judge to order its destruction, as it did in the highly debated Lamb of God case. That dog was spared, though, after a judge allowed it to be sent to a no-kill nonprofit in Austin.
"At this point, we don’t know if the dog will go back to the rescue," Jamison said. "They could surrender it or dispute a 'dangerous dog' finding. But we have until the middle of next week to finish the investigation."
https://www.dallasnews.com/news/news/2017/12/21/family-wants-rescue-dog-euthanized-after-toddler-mauled-pet-adoption-event
https://stluciatimes.com/2017/12/22/pit-bull-mauls-2-year-old-boy-pet-adoption-event

I have one rule for my dogs. One, and done. That is one bite, one attack, one break of the skin, and it's dirt nap time. I don't know why rescuers are so lenient with dangerous dogs? I highly doubt the pit bull was a mix, it was probably a black pit bull with white markings.

Anyway, pit bulls are a dime a dozen, why does it take so much effort to do the right thing? We need to give it a second chance! We need to rehab it! We need to redeem it! FOR WHAT? Aren't human children more important? Oh, wait, I'm not a fur mommy. If I were, I'd probably fight for my pit bull babies too!