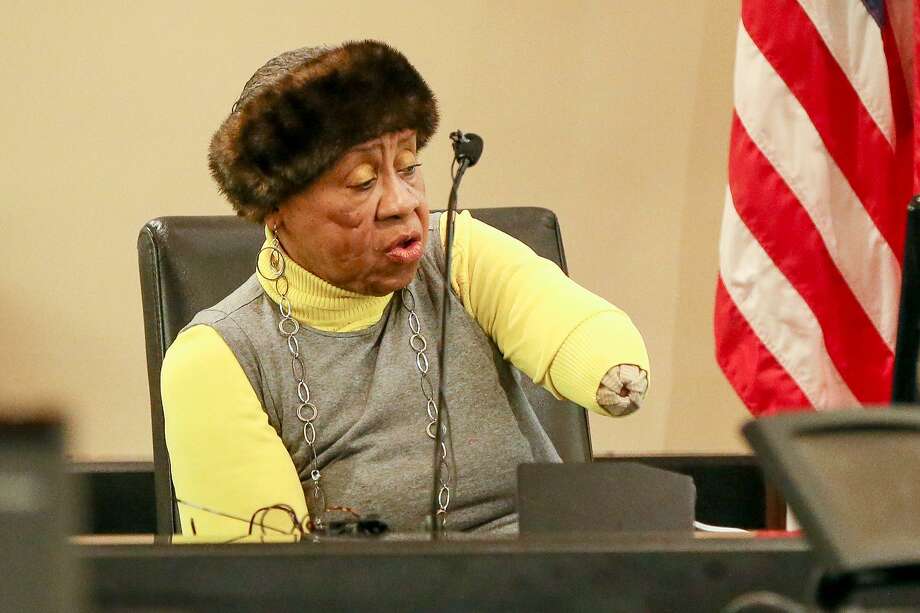 A 72-year-old woman who was attacked by her neighbors' 70-pound PIT BULL MIX  told a jury Friday how she survived the ordeal.
"I was fighting for my life," Doris Mixon-Smith told the jurors.
Mixon-Smith told the jury how the dog mauled her on the morning of March 6 as she worked in her front yard flower garden. The dog had escaped from his owners' backyard.
"I looked up and he looked like an albino dog. .. mouth was wide open and I said, I started hollering, 'Please help me. Oh God, please help me," Smith told the jurors. "He came at me with his mouth wide open."
"Did his mouth make contact with your left arm?" prosecutor Daryl Harris asked Mixon-Smith.
"Do you see it here, Mr. Harris?" Mixon-Smith answered, as she gestured toward her upper left arm, which was torn from her body just below the shoulder in the attack.
Mixon-Smith told how a young neighbor managed to free her as she tried to get into her house.
A police officer arrived minutes later and shot the dog to death.
"God covered me, God covered me, and I passed out," Mixon-Smith said.
The dog's owners, Alphonso McCloud and his wife, Stanyelle Miles-McCloud, are facing dangerous dog attack serious bodily injury charges.
If they're found guilty, the couple face a punishment ranging from probation to a maximum of 10 years in prison.
The trial resumes Monday in Judge Joey Contreras' 187th District Court. Reading this makes me want to faint. I do not comprehend people that do not want to stop this type of mauling. All of the excuses, protecting its property, lawn mowers, the dog recognized the victim as the "lawn mower", is absolutely ridiculous. THERE IS NO EXCUSE FOR THIS TYPE OF ATTACK! LOSING AN ARM? REALLY?

Don't shoot my dog? Nutters are really insane. Save the dog, who cares about the victim, or future victims, don't shoot my dog! Hey nutters, keep control of your ugly maulers, and we won't have to shoot them to death! The more pit bulls that get dirt napped with bullets, means there will be less victims, less chance of the mauler getting smuggled to Canada, and less pit bulls on the planet. FINE BY ME!

I know this can't be a new trigger for the list, but how horrible that the victim would mow the lawn for those young, able-bodied slackers!