SEGUIN, GUADALUPE COUNTY TX - TWO SISTERS AND THEIR FRIEND WENT RIDING LAST SUNDAY AND "A DOG" ATTACKED THEIR HORSES AND 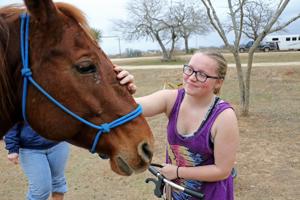 
Melyssa Ragland, 14, spent almost three days in the hospital after her horse was attacked by A DOG last Sunday.

It definitely sounds like a pit bull. What other dog regularly hunts horses, people, other pets, babies, grandmothers, etc.?

It is terrifying to have dogs come after horses while you are riding. We should not have to worry about this crap, but pit bull apologists have an agenda, and that is to hand your rights to a pit bull.