VALENCIA, SANTA CLARITA CA - BARRY BEGGS, 78, WAS WALKING HIS BELOVED LITTLE RUBY ON A LEASH WHEN A NUTTER WITH A BIG BLACK LAND SHARK ON A LEASH WALKED BY THEM...AS THE MONSTER CHARGED THEM, HE WAS KNOCKED DOWN BATTERED AND BRUISED AND HIS LITTLE RUBY WAS DEAD...AS THE NUTTER WALKED AWAY WITH HIS PIT BULL ON ITS LEASH!!! 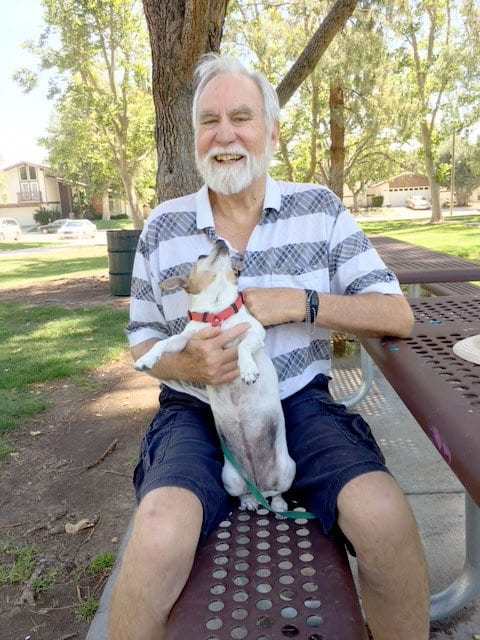 For the past 10 years  Barry Beggs has walked without problem along the paseos that wind through the backyards of Valencia homes near Meadows Elementary School. His walk on the early part of Dec. 10, however, ended in blood and brutality when a charging PIT BULL  knocked him over, then mauled him as he wrestled in vain to save the life of his little dog, Ruby.
The attack left the 78-year-old Newhall man bleeding from his hands and arms, cut from his fall to the ground, bruised and battered with injuries to his legs, back and hip. Ignoring his own injures, Beggs gathered Ruby up in his bleeding arms and rushed her to a vet, only to learn his dog was so badly mauled, that the only way to avoid its intense suffering was to have it put down. Now, the search is on for  THE OWNER OF A  BIG BLACK PIT BULL  who regularly walks his dog from the paseos near CalArts to Granary Square.
“We need to get that dog and that owner,” Beggs told The Signal. “I’m worried it could attack a kid or an older lady.”
Recounting his story for The Signal on Tuesday, Beggs said he was walking along the paseo from Tournament Road towards Valencia Meadows Park when he stopped to talk to a woman between Parada Drive and Valen Drive.  “I saw this guy come the other way,” he said, describing the man as walking a large black pit bull on a leash.  “He said something and I waited for him to go by,” Beggs said. “He walked by a little and turned around.
“The next thing I know I was going down. The dog bit my leg and I went down. (The fall) messed up my back and hip. I fell in the shrubs and it took a chunk out of my nose.  My glasses were all cock-eyed.  Then I was rolling around in blood trying to grab Ruby out of this dog’s mouth.  I put my hands up into his mouth. I couldn’t get up right away."
“He (pit bull owner) never tried to do anything.  I was in a panic,” he said.  After the attack, Beggs picked up Ruby’s lifeless body.  “I hollered out ‘She’s dead,’” he said.
Beggs said he drove to a veterinarian, but found the office closed. He then drove to the All Creatures Veterinary Center on Lyons Avenue with Ruby in a box.  “She was curled up on the top of the folded box,” Beggs said, when he handed the injured chihuahua/Jack Russell mixed breed dog to the vet.
After an examination, “the vet had a sad look on his face.  He said she had broken ribs and punctured lungs. There was a lot of blood. There was (internal) bleeding inside,” the owner recalled.
“I was standing there with blood from head to toe, but I did not want this poor thing suffering,” he said.  “I told the vet, if you’re going to put her to sleep, do it as soon as you can. I didn’t want her to suffer,” Beggs said. “It was horrible.”
Then Beggs went to Henry Mayo Newhall Hospital to get himself examined.  On Tuesday, Beggs said his injuries were still healing.
“I tried to get the (Santa Clarita Valley) Sheriff involved,” he said. “I asked if I could make a citizen’s arrest.  “They (deputy) said, ‘On what grounds?’ I said, ‘because he attacked me with his dog.”
Sheriff’s deputies turned the matter over to officers with the Los Angeles County Department of Animal Care and Control. Beggs wants to find the pit bull and its owner, worried a similar attack could hurt or kill someone.  Since the attack, others have joined in the search for the dog and its owner.
After learning of the dog attack, Wendy Davis, of Valencia, set up a site on Facebook calling on people in SCV to come forward to identify the dog’s owner.  “He has a second dog, which looks like a shepherd mix,” she told The Signal.
The dog identified in the attack, however, was the man’s “huge black pit bull mix,” she said.  “We have to get (the pit bull) off the street,” Davis said.
Beggs has been in constant touch with a an officer assigned to investigate the case for Animal Care and Control, and spoke to her on Tuesday.
“At this time, we can confirm an attack that has been reported to have occurred on December 10 was reported to us (Animal Care and Control) on December 18,” said Don Barre, spokeswoman for the Los Angeles County Department of Animal Care & Control, “and it is currently under investigation.”
https://signalscv.com/2018/01/pit-bull-mauls-elderly-man-kills-dog-valencia-paseo/