WILLIAMS, JOSEPHINE COUNTY OR - A NEIGHBOR'S PIT BULL "SOMEHOW" BROKE ITS CHAIN AND CHARGED JEREMIAH FROHLICH, 2, PLAYING OUTSIDE WITH HIS SIBLINGS - BROKE HIS ARM, INJURED HIS NECK AND SCALPED HIM

WILLIAMS — A 2-year-old boy mauled by a PIT BULL  Dec. 27 is fighting to recover after his scalp was pieced back together and reattached during a 16-hour surgery last week at Doernbecher Children’s Hospital in Portland.
Jeremiah Frohlich was playing outside with two older siblings when a neighbor’s dog broke loose from a dog run and attacked the child.
The boy’s mother, Serena Neve, said the family had already been in financial straits prior to the attack and now, in addition to the toddler facing a long recovery, the family is desperate to find a new home so the toddler won’t have to return to the house where he nearly lost his life.
In addition to having his scalp torn off, the boy suffered a neck injury and broken arm, and he is having stomach issues related to the trauma of the attack, she said. 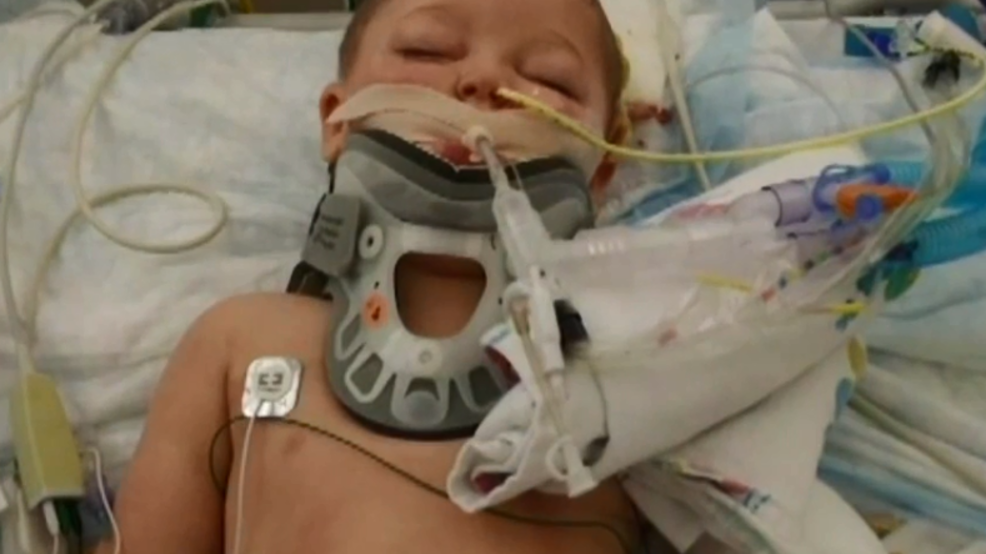 Neve said she was doing a cleaning job in rural Williams when the attack occurred.
“The dog had been tied up, but he charged and broke the runner and knocked over Jeremiah and broke his arm when he yanked it and took him down. He bit the top of his scalp, it was absolutely traumatizing,” Neve said, noting that her 13-year-old daughter, Athena, charged at the dog, screaming until he let go of the toddler.
“She basically saved his life. She loves her baby brother so much. My husband was outside but not close enough to stop it, so my 8- and 13-year-old witnessed it.”
“Jeremiah was not even in the hospital for 10 minutes before they said he would have to be life-flighted (to Portland),” said the mother. “A friend of ours had to run back out to Williams and get the scalp and put it on ice and bring in to the hospital before they could leave.”
Doctors initially worried the surgery would require extensive grafting, as well as moving a vein from the boy’s leg to his head, but the pieces of scalp fit together, “like a puzzle,” Neve said, and relocating the vein was unnecessary.
Neve said the dog’s owner was arrested on a warrant unrelated to the dog attack. Josephine County Animal Control officials did not return calls Friday.
With a long road ahead, Neve said, her family is trying to focus on Jeremiah’s recovery while caring for their other four children. The house where the family lived was a converted shop, and they shared a bathroom with the house occupied by the dog’s owner.
Neve’s husband, Scott Frohlich, recently lost his job. The family is currently relying on a spot at the Ronald McDonald House and is accepting donations for food and housing while the boy is hospitalized in Portland.
“At the time it happened, I was on maternity leave and my husband was working. As a family, we had made the choice for me to be home with the kids and be on unemployment. Then my husband lost his job, and our car broke down. It’s been one thing after another, and then this,” she said.
“My only goal in this besides my son’s recovery ... is that I don’t want to bring my baby back to that house. I don’t feel like I can go back there.”
A crowd-funding appeal has been set up for the family at www.youcaring.com/serenaandscott5kiddos-1054283. As of Saturday, $1,639 had been donated.
— Buffy Pollock is a freelance writer living in Medford. Email her at buffyp76@yahoo.com.
http://www.mailtribune.com/news/20180106/toddler-recovering-from-pit-bull-attack

It is easy and cheap to tie a dog on a runner. However, it is not safe unless the dog is not aggressive at all. Restraining a pitbull this way is insane. I am just glad the injuries were not more serious or fatal. This could easily have been a fatality. I hope the dog was euthanized and the owner cited for this tragedy. He should pay the medical bills. Of course, pitbull owners never have any money.

Why do parents who live near pitbulls never see it coming?!
I have a mental map...We have 3 pitbulls and one bull terrier in our neighborhood. All 4 dogs are either owned by lowlife renters or a crazy desperate housewife. It really limits my kids freedom to play outside and I'm always outside with them. It gives me rage seeing these kinds of dogs in our neighborhood. If you own a pit, you are not my friend.

Whip up a batch of chocolate treats sweetened with zylitol and leave them out for the doggies. Chocolate and zylitol are both toxic to dogs. It might take a while to work however.