HAWTHORNE, PUTNAM COUNTY FL - A JOGGER WAS ATTACKED BY 3 DOGS, A LAB AND TWO PIT BULLS, IN FEB - DESPITE PREVIOUS REPORTED ATTACKS BY THE SAME DOGS, ANIMAL CONTROL ALLOWED THE DOGS TO REMAIN WITH THEIR OWNER


Nearly a month after a Putnam County man said he was attacked by three dogs, News4Jax learned on Monday that the dogs have not been taken away from the owner.
According to a Putnam County Sheriff's Office offense report, the attack happened in late February, and the dogs were then quarantined to their home for 10 days.
The victim, Willie Thelosen, said he believes Animal Control is not doing its job by allowing the dogs to remain with their owner.
Thelosen said he was jogging along East Cowpen Lake Road on Feb. 24 when his exercise was interrupted by three dogs. According to the offense report, the three unleashed dogs came from one property.
"Out of the corner of my eye, they were right on me. All I had was shorts on and shoes," Thelosen recounted. "The only thing I could do to keep them at bay was to try and kick them."
But he said the dogs kept biting him, so he picked up a stick to fight them off.
"It was the only way to keep them away from me -- to hit them," Thelosen said. "They kept coming back repeatedly."
Thelosen said he had to be treated for seven bites, with puncture wounds to his hands and legs.
In Jacksonville, this kind of attack would have resulted in the dogs being removed from the owner, impounded and possibly euthanized. But that didn't happen in this case.
"There is actually a Putnam County ordinance that says if a dog does a severe bite, which is defined as multiple injuries, the dog is supposed to be immediately confiscated and quarantined and euthanized after 10 days," Thelosen said. "They didn't follow that after these dogs gave me severe injuries."
The dogs remain with their owner. When News4Jax went to the owner's home on Tuesday and rang the doorbell, dogs could be heard barking inside. The owner said she did not want to comment.
The offense report confirms the attack occurred and the dogs were quarantined inside the home. The report also confirms Animal Control knew about the attack and had been called to the home before to investigate a previous attack.
News4Jax called Putnam County Animal Control Director Bob Pierce to ask about the protocol in place when a dog attack happens, but he said he could not comment as long as there was a pending investigation.
Thelosen said he's planning to sue the dogs' owner. Several other people in the community said they've also been attacked by the same three dogs.
Months before the attack in late February, Bill Hanssen said that he was walking down the same road when he was attacked by the three dogs."They bit me on the leg pretty deep," Hanssen said. 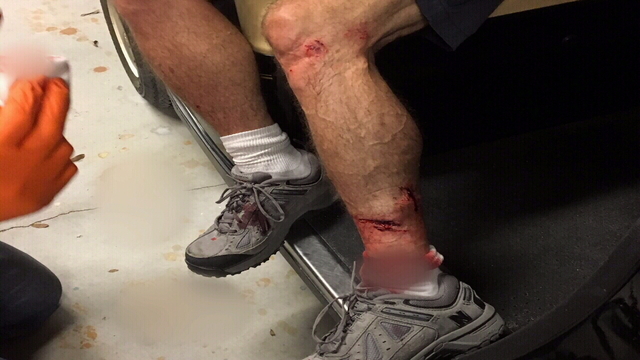 Hanssen said he was bitten multiple times, and reported his injuries to Animal Control.
Two others neighbors said they've had close calls with the same three dogs, which they described as a yellow LABRADOR RETRIEVER and two PIT BULL MIXES.
"They pinned me in my car with all three of them at my passenger window," Landis Young said. "I could not get out."
Neighbor Calvin Taylor added, "I've had to tap them with a rake or shovel a few times." 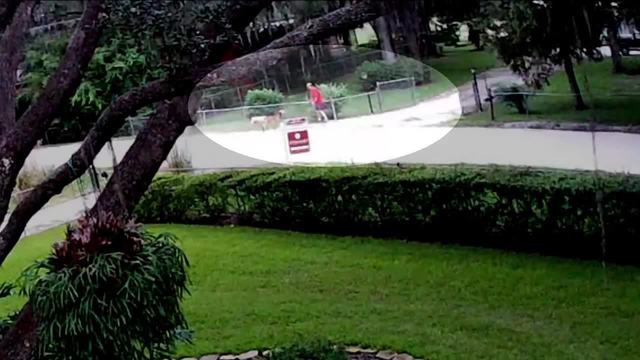 Surveillance video shows the dogs chasing a man as he tries to get to his driveway. In the video, the man doesn't turn his back to the animals and he's eventually able to get inside a gate and close it.
After Thelosen was attacked, the offense report said, the dogs were quarantined inside their owner's home. But neighbors said that's not enough.
“I think they should be taken away," Young said.
"I don't care if they euthanize them, as long as they take them somewhere else," Hanssen said.
https://www.news4jax.com/news/florida/putnam-county/putnam-county-man-says-he-was-attacked-by-3-dogs

Sigh... My neighborhood again. This is just across the lake from me. And a two minute drive from the property where Roy McSweeney was murdered by his neighbor's pit bulls in 2011 (http://blog.dogsbite.org/2011/06/hawthorn-man-suffers-arm-amputation-and.html).
I'm mostly just surprised that this (and worse) doesn't happen more often. A Sheriff's Deputy once told me to shoot a neighbor's pit if it came onto my property. He said, "Don't bother calling first. You live at the ass end of the poorest county in the state. No one's gonna get here before something bad happens." Back then I had two toddlers and a husband who traveled for work. Carrying a gun and pissing off the crazy neighbor who I called Swamp Thing
in my head did not seem like a good idea.
We are hostages to pit bulls and their self-entitled brainless owners. Animal Control is pit bull central. If they show up at all it's just to tell you how sweet the pits really are.