PIERCE TOWNSHIP OH - HOW MUCH OF ANIMAL CONTROL'S TIME DO PITS AND THEIR OWNERS TAKE UP WASTING TAX PAYER'S DIME? THIS "RESPONSIBLE PIT OWNER" HAS BEEN CHARGED 4 X'S IN 14 MONTHS FOR THEIR LOOSE PIT ATTACKING ANOTHER DOG AND BITING A NEIGHBOR

....AND SO FAR THEY'VE PAID LESS THAN HALF IN FINES- $230 - COMPARED TO THE VET BILL OF JUST ONE ATTACK ON THE OTHER DOG - $500.  AND CHECK OUT HOW THIS "RESPONSIBLE PIT OWNING FAMILY" MADE THEIR FENCE HIGHER TO ACCOMPLISH "KEEPING THEIR PIT AT HOME".

When Meagan Baldwin walks her dog, Ghost, she drives him out of the neighborhood.
Baldwin and her husband, Josh, said a dog named Boss, has gotten loose and attacked Ghost, a 2-year-old Husky mix, three times. The first incident happened in January of last year, right next to Boss' front yard.
"All of a sudden, he just grabbed onto his throat," Meagan Baldwin said. "...I was in tears, trembling, shaking, because I thought that the dog was going to kill my dog ... I was in hysterics, crying. I was so scared."
The 9 On Your Side I-Team found that that Boss' owner, Vonya Harrison, has been charged four times with failure to confine or restrain a dog in just the last 14 months. She was found guilty in three cases of failure to confine or restrain a dog, and she's paid $230 in fines and fees. Clermont County Dog Warden Curtis Bonhoff said it's rare for someone to repeatedly have the same issues. 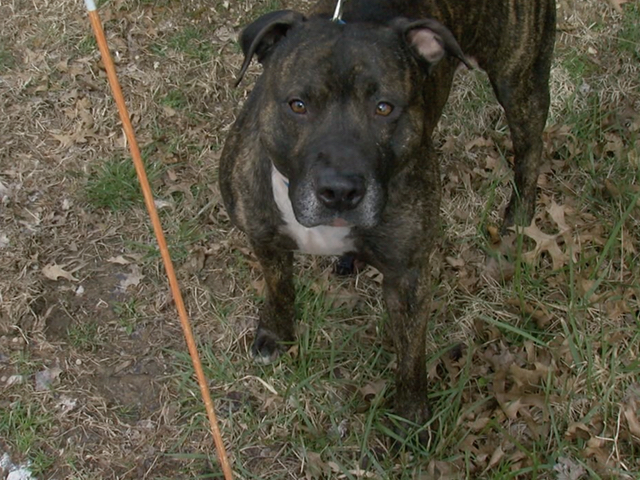 "I don't think we've had a situation with anybody like this," he said. "It's been over a year now, and we keep facing the same issues over and over again."
After the first incident, Magistrate Anita Beckmann found Harrison not guilty.
In June, Ghost was playing on a deck with the Baldwins' friend, Kevin Murrison, when Boss ran up to them. Murrison said the dogs went after each other. Boss bit down hard on Ghost's neck, shaking him, leaving Ghost with 10 puncture wounds and a torn ear.
"The owner of the other dog finally showed up," Murrison said. "They ran over and she started beating the dog with a chair, and that was the only way to get him to unlock from the dog's mouth." 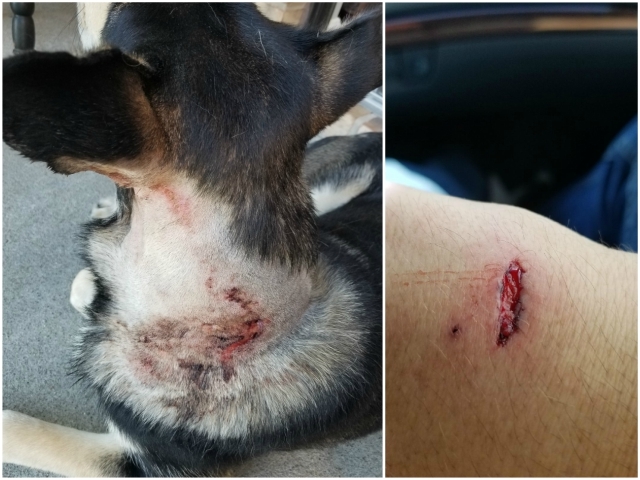 After that bloody attack, Bonhoff cited Harrison for having a "dangerous dog," a designation that would put more limits on Boss and make it easier to take him away from the Harrisons. But Judge Jesse Kramig dismissed the charge at the request of the Clermont County Prosecuting Attorney's Office because the dog warden's office didn't appear in court.
"I think there's the one occasion the dog needed to be deemed 'dangerous,' after biting the individual," Bonhoff said. "We needed to stay more on top of that."
The judge found Harrison guilty of failure to confine for the June incident. She paid a $25 fine plus court costs.
Harrison said she doesn't believe Boss is dangerous. But Boss got loose again on Christmas day and bit Ghost again, according to the Baldwins. 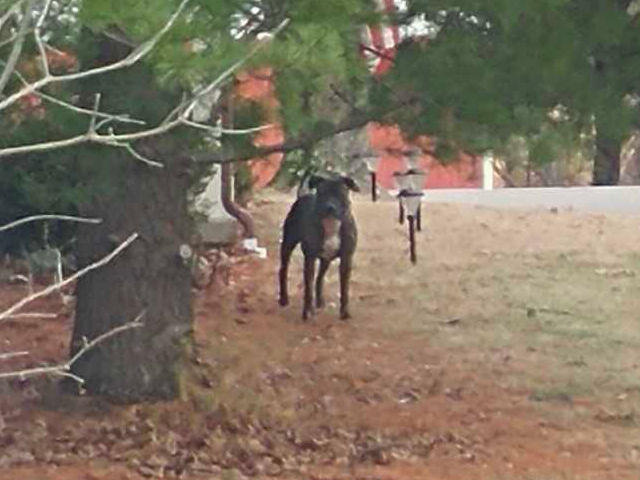 "I used to own a pit bull," Murrison said. "I know it's not the dog's fault. It's the owner's fault."
Sarah Haevener's family lives next door to the Harrisons. She called the situation "ridiculous," saying something should have been done by now.
"I'm scared for my kids at home," she said. "The owners seem to not care at all."
Harrison admitted that Boss was "getting out probably once a week" when they first moved in. She said her family tethered Boss to a backyard tree, and he got loose. They put up a higher fence, but Boss still got out.
"At that point, I was doing everything I could do," Harrison said.
The I-Team interviewed the Harrisons three weeks ago. Vonya Harrison said she didn't realize how strong the breed is. Her son, Eric, insisted the dog is loving and obedient.
"We're sorry about what happened," he said. "But we're going to make sure he's always on a leash because we don't want to have him taken away."
But last week, Boss ran wild again. Harrison was again charged with failure to confine. She pleaded guilty, paid a $120 fine and still has Boss.
"The only thing that keeps happening is just tickets," Baldwin, Ghost's owner, said.
Another court hearing is scheduled for April 12 to determine if Boss should be declared a "dangerous dog." Under Ohio law, a dog can be identified as "dangerous" if the owner is convicted at least three times of failure to confine, or if the dog bites and injures a person. Boss meets those qualifications.
"I don't feel like I've done anything wrong," Harrison said. "I feel like I've taken all the necessary steps that I could take."
For now, Boss will continue living with the Harrisons. But if he's declared "dangerous" and gets loose again, the Harrisons may lose him for good.
"I think the dog should be removed and placed in a home where it can be contained," Baldwin said. "It's just gone on for way too long."
https://www.wcpo.com/news/local-news/i-team/i-team-owner-charged-4-times-in-14-months-for-loose-dog-accused-of-biting-neighbor-other-dog?page=2
Posted by Decatur AL livin nt to 4 pits at 1:22:00 PM

Kill the damned thing already! Before it kills someone or their pet.

I don't know how in OHIO, home of the late Klonda Richy, Animal refuse-to-control can say "They've never had a case like this". Are these people illiterate? Don't they have access to the Internet? A phone? A TV? A newspaper???

The owner doesn't think she has done anything wrong! Is she mentally challenged? If she cannot figure out how to control a dangerous dog, she doesn't need to have the dog. Furthermore, very few intelligent people would adopt this dog if they knew the dog's history. Therefore, the owner needs to invest whatever thousands of dollars required to securely confine this dog or sign it over for euthanasia.

This sounds like my neighborhood, minus all of the attacks! I have pit bulls across the street that get out frequently, and animal control has done nothing. I believe in PREVENTION, so I call all of the time. I don't think my "neighbors" have paid one fine. Yeah, that'll teach them to be responsible!

Ohio needs to bring back the State Breed Safety Laws (BSL) they repealed in 2012. 5 people killed by pit bulls there since!

In Ontario, Canada BSL prohibiting the breeding and importing of UKC American Pit bull terriers, CKC Staffordshire Bull terriers; AKC American Staffordshire terriers and their mixes; since 2005 reduced serious level 4 bites requiring surgery by 92% in 443 Cities for 13 million people. Therefore, Even BSL loosely enforced is better than no BSL at all.

There will be a lot more official intervention when Boss finally mauls or kills a person. We'll see cops, paramedics, life-flight personnel, a hero neighbor getting mauled while trying to save the victim. Then, if someone doesn't wise-up and shoot this dog, we'll see the dog get his day in court as they "decide whether or not he's dangerous". And, yes, the idiot owner will be there (probably with a lawyer) to speak out about his poor wigglebutt who is so misunderstood. After all that, all the owner has to do is move the dog to another county and the whole thing can start over again. Been there, done that, got the t-shirt.