NORTH RUIMVELDT, GEORGETOWN GUYANA - 3 PIT BULLS "SOMEHOW GOT OUT" AND MAULED A WOMAN WALKING TO A RELATIVE'S HOUSE ... DESPITE SPORADIC MAULINGS AND DEATHS MOSTLY BY PIT BULLS, NOTHING HAS BEEN DONE ABOUT DANGEROUS DOGS 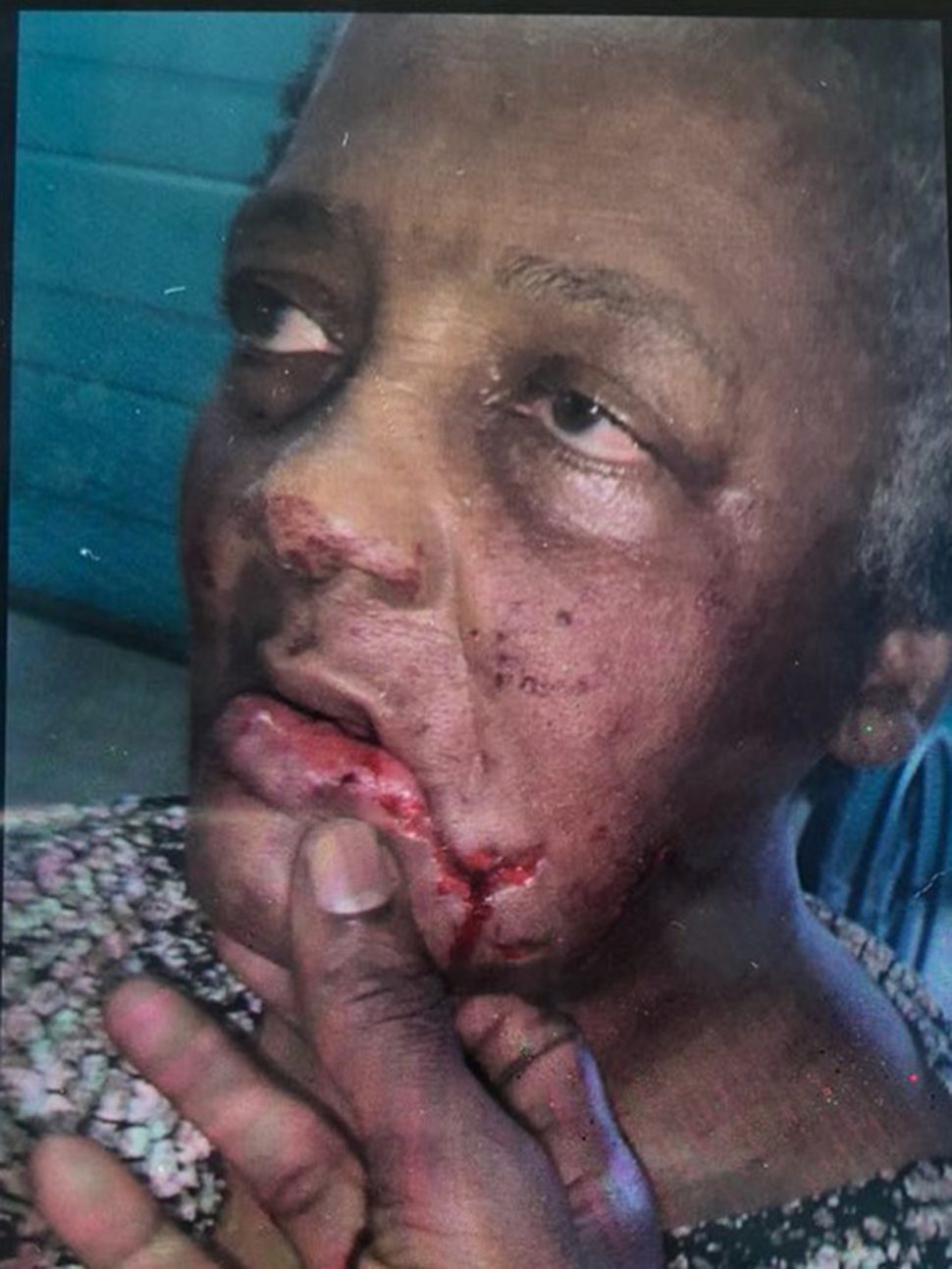 Ingrid Wilson, the woman who was attacked in North Ruimveldt, Georgetown by THREE PIT BULLS, received over 70 stitches for her injuries and is currently at home recovering.
Wilson was on her way to her son’s nearby home around 6 am on Sunday when she was viciously attacked by three pit bulls that escaped from a neighbour’s yard.
The three dogs pounced on the woman, who fell on the ground. They bit her to the face, neck and arms and the attack only stopped after another neighbour realised what was happening and fended off the dogs with a piece of wood.
Wilson was rushed to the Georgetown Public Hospital, where she was treated. According to one of her sons, who did not want to be named, she was treated for two bites to her face, both at the side of her mouth, and about four more on her left hand, which she used to fight the dogs off.
After receiving the stitches, she was released around 4 pm on Sunday from the hospital and she is currently at home recovering.
“So far she’s not doing all of that well because she’s going through a lot of pain right now. She’s just complaining about the pain but we are trying our best to help her,” he told Stabroek News yesterday.
He also explained that the owners of the dog along with his family visited the police station yesterday and the attack is currently being investigated.
Despite several reports over the years, nothing has been done to curb the sporadic attacks by dangerous dogs.
In 2016 a Leonora, West Coast Demerara, man was mauled to death by pit bulls. The dogs had also reportedly attacked two other men at Para Field.
The two injured men were identified as Ramanand Bhikam, 62, of Stewartville Housing Scheme, WCD, and Wilbert Adams, of Cornelia Ida, WCD, who were attacked between 3am and 5am on September 15, 2016.
The homeless man who died as a result of the attack was later identified as Bashkar Chandar, of Section ‘C,’ Golden Grove, East Bank Demerara. The post-mortem examination of the man had stated that he died as a result of multiple injuries due to a canine attack.
There have also been several reports of dangerous dogs escaping from their owners’ yards and attacking people of various ages, including children.
A letter published in this newspaper on October 12th, 2017, stated that a man who lives in Prospect, East Bank Demerara, has more than 20 dogs that are very ferocious. Despite the large number of dogs, the man reportedly does not have a gate or fenced yard, and he is surrounded by three schools – the Covent Garden Primary, Kindergarten and Secondary Schools.
“Every day these dogs attack the schoolchildren either to or from school, and even sometimes others. Some might throw a small brick at them, but they would be soundly vilified by either the man or his wife. Most children are afraid to pass that area (it is the only street that can be used to get to the school) due to these ferocious dogs. I am a concerned parent who is asking the relevant authorities to kindly look into the matter, because I have two children: one attends the primary and another the secondary school,” the letter stated, while adding that the author’s daughter was attacked by the dogs a few years before.
In 2014, the Guyana Society for the Prevention of Cruelty to Animals (GSPCA) had said that the legislation on dangerous dogs is even more crucial after a woman, Joan Carter, was mauled to death by pit bulls.
The GSPCA had called for a more purposeful approach to the matter and had pointed out that in Trinidad and Tobago an amendment to the Dog Control Act in 2014 specifically addressed the responsibilities of ownership of a dangerous dog breed, and in relation to the pit bull, the dog has to be registered and micro-chipped while the owner has to have a secured surrounding.
Additionally, it had said that the issue can no longer be ignored, especially with the practice of dog fighting and that while the proposed measures may not prevent recurrences, it believed that properly-enforced legislation would be a big step in addressing the issue of dangerous dogs.
Since then there has been no headway in tabling legislations to address the issue.
https://www.stabroeknews.com/2018/news/guyana/08/28/north-ruimveldt-woman-receives-over-70-stitches-after-pit-bull-attack/