WOLLONGONG BEACH NSW AU - A PIT OWNER UNABLE TO CONTROL HER LAND SHARK ...MEAT GRINDER FILMED ON GOPRO ATTACKING A HORSE BITING A VEIN IN ITS FACE AND BITING THE RIDER 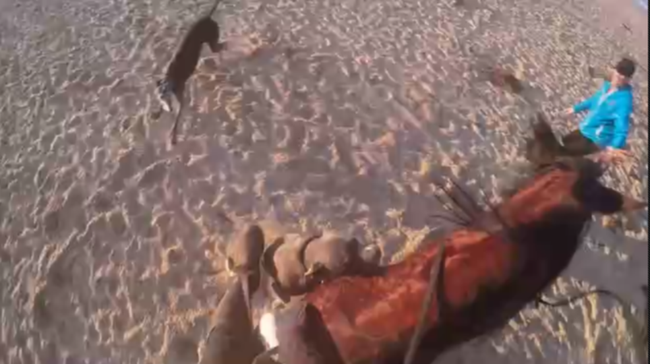 
A distressed Sydney man said he was forced to use a piece of string to stem his horse’s bleeding after it was set upon by an out-of-control dog.


What started out as a peaceful ride down a Wollongong beach for Nathan Bourde and his equine mate Summer quickly turned into a desperate fight for survival after an unmuzzled dog, which he believes to be a PIT BULL, pierced a vein in the horse’s face.
When other dogs suddenly joined in the vicious attack, all of which was captured on his helmet-mounted GoPro, the 36-year-old began fearing for his horse’s life.
“Before I even recognised what sort of breed it was, it was lunging at the horse,” Bourde told 7NEWS.com.au.
“It was snapping at her legs, biting her stomach and chest. Then it bit my foot.”
“It didn’t have a leash, it wasn’t muzzled and the owner was completely unable to restrain her."
The sound of the woman’s futile attempts to regain control of the dog can be heard being drowned out by screams and incessant barking.
Bourde's attempts to flee the area on the horse were quashed when several other dogs suddenly joined in the attack, overwhelming Summer and sending Bourde flying into the sand.
“Once the pit bull initiated the attack, they all jumped in,” he recalled.
“I was trying to kick the dog away, then it lunged at her face and bit a vein.
“It was like a tap, the way the blood was pouring from her face.”
A “physically exhausted” Summer attempted to fight back before her owner managed to grab the dog by the scruff of the neck.
“I was holding the horse in one hand and holding the pit bull in the other,” Bourde said.
“I screamed at the lady to come and get her dog."
Fearing for Summer’s life, Bourde knew he had to act fast.
“She was bleeding to death... I ended up tying it up with a piece of string,” he said.
The horse was loaded back into the trailer and raced to the vet, where her wounds were tended to.
In New South Wales, 'American pit bulls' or 'pit bull terriers' are regulated by the state's "restricted dog laws".
Restricted breeds can no longer be sold or given away in NSW and it is illegal to accept ownership of such a dog.
The law states that the dog can never be walked off its leash, even in a designated off-leash park.
Those who already own any dog on the list must desex and register it.
The dog must also wear a securely fitted muzzle when outside its enclosure.
"When outside the enclosure, the dog must wear a distinctive red and yellow striped collar and be walked on a secure chain or lead." the regulation reads.
Describing them as "vicious" and "violent killers", Bourde said owners of such breeds have a responsibility to the public to ensure they are kept on their leash.
"What if it had killed the horse?" Bourde asked.
"What if there were children?
"All of this could have been avoided if this dog was on a leash with a muzzle."
While Summer is now on a course of antibiotics and on the road to recovery, Bourde has questioned the response of the Wollongong Council for not doing more to hold the owner responsible.
A Wollongong Council spokesperson told 7NEWS.com.au that the matter had not been reported to council.

I can't watch. Reading it was heartbreaking enough. I HATE PIT BULLS!