POTTON QUEBEC CANADA - DOMINIQUE ALAIN, 55, WAS MAULED BY 3 DOGS WHILE JOGGING ON MARCH 29 ...HER LIFE WILL NEVER BE THE SAME AND SHE FEELS SHE IS LIVING IN THE "WRONG SOCIETY" WHERE "THE ANIMAL IS MORE IMPORTANT THAN THE PERSON"

While out for a jog this spring in the Eastern Townships, an active, 55-year-old Quebec woman had the life she knew torn apart by three dogs.
She was attacked on the evening of March 29 while jogging near her home in Potton, Que., about 100 kilometres southeast of Montreal.
Twelve surgeries later, Dominique Alain is missing a tricep, her legs are still wrapped in bandages and she is going to physical therapy three times a week.
Her life will never be the same, and it's with increasing frustration that she sees a lack of action from lawmakers — and no criminal charges against the dogs' owner.
Alain said that if no charges are laid, she feels she is living in the "wrong society," where "the animal is more important than the person."
"The owner of an irresponsible dog needs to become legally responsible for their dog," Alain said in an interview with Radio-Canada.
Quebec's Director of Criminal and Penal Prosecutions said it received the file mid-May and is analyzing it. It would not comment further.
The dogs were euthanized after the SPA de l'Estrie, an animal protection organization, found them to be aggressive and presented a "very serious, and perhaps deadly, risk to the population."
Running has always been a stress reliever for Alain. While jogging near the Owl's Head ski resort, she noticed the dogs barking aggressively inside a nearby house. She remembered thinking, "OK, that's a good thing they're inside."
When she passed the house on her way back, the dogs were loose. "[The dog] comes right at me. Then I see a second and the third one coming."
The dogs did not slow down. They ran straight at her, barking, snarling and baring their teeth. She remembered thinking, "What's going on? Stop! Stop! And then they just kept going, going," Alain said. "They worked together and then tore my clothes and then started just going into my arms and ripping the skin." 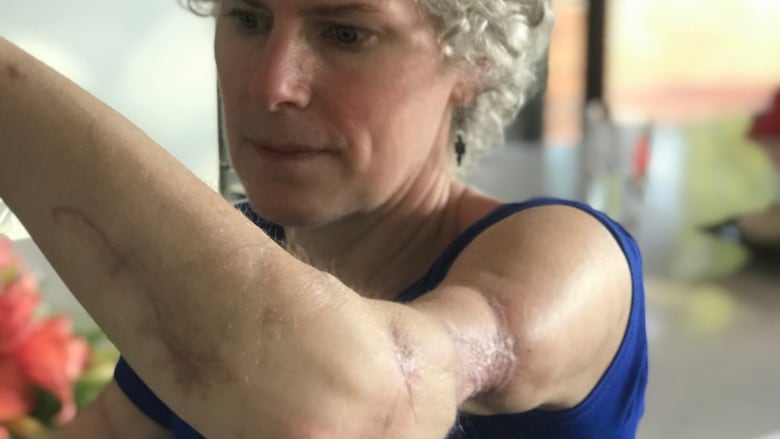 She managed to fight back as best she could. She grabbed one of the dogs by the collar, trying to get him off of her, but she said they were unstoppable. "And then finally, finally, I thought I was going to die," Alain said. "This is it: I'm going to die."
Then the owner of the dog came out, she yelled at him to call 911. She remembers one of the first responders in the ambulance telling her, "Don't give up, don't let me go. Stay with me."
In the hospital, Alain was in an induced coma for two days, and then spent weeks getting medical procedures and rehabilitating with her partner, Leo Joy, by her side. Her injuries were extensive. She had to be resuscitated in hospital and lost muscle, tendons and tissue in both of her arms and legs.
Pointing to the space where the muscle on the back of her arm should be, she said, "This is gone. I lost muscle. I lost ligament.
"It's horrible, she said, and it should "never happen, should not happen. It has to stop."
Earlier this year, the Quebec government introduced legislation aimed at tightening the rules around dangerous dogs, giving municipalities a set of rules and the flexibility to adopt stricter ones if they see fit.
Under the new rules, dog owners would be required to register their animals, ensure they're wearing a collar and on a leash when in public.
There would also be strict rules covering inspections and seizures, with penal provisions for those who disobey the law.
Alain said the rules need to go further. She wants dog owners to be obligated to take a safety course and have insurance to cover medical costs if their animals attack someone.
Jean-François Del Torchio, a spokesperson for Public Security Minister Geneviève Guilbault, said in an email the government has consulted with stakeholders and could make additional changes before passing the legislation into law this fall.
Caroline Kilsdonk, the president of the Quebec Order of Veterinarians, said that dog owners "have to take responsibility and be accountable."
"This attack is proof that sometimes dogs are aggressive — and are free repeatedly. And dogs should not be left to roam free," said Kilsdonk. 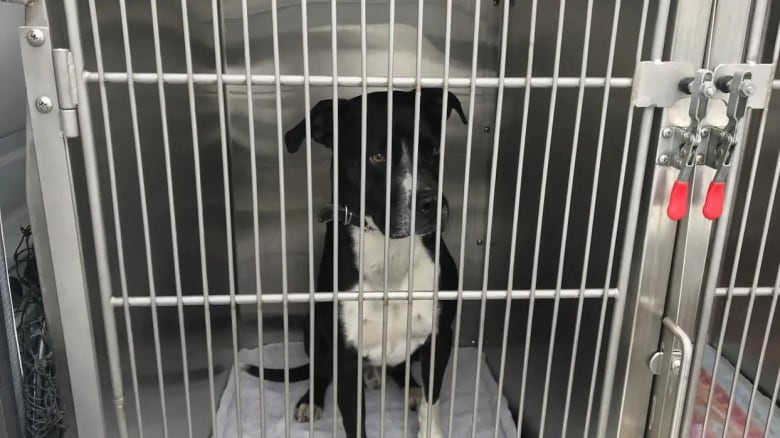 (This is one of the 3 dogs that attacked her.)
Alain has been in rehabilitation for three months, with plenty more to go.
"There's cost to that, not to mention physically what I have to go through for the rest of my life," she said.
She needed not only prosthetics and therapy, but also special modifications to her home.
"If your dog has attacked a human, children — you as an owner, you're responsible with it," Alain said. "So you have to live with the consequence of negligence."
(Based on an interview by Radio-Canada's Mélissa Fauteux, files from CBC's Daybreak and Elysha Enos)

I prefer pit bulls be extinguished from the planet. There is not one redeeming quality that a pit bull provides that the other 900 breeds cannot. I can tell you, if it were 3 Golden Retrievers that got loose, this lady would not have been in an induced coma for 2 days.

Pit bulls are ugly, dangerous, unpredictable, unnecessary, unsafe, unstable, and a menace to everyone around them, including their owners, and their owners "loved ones."