PLYMOUTH, MARSHALL COUNTY IN - THE FATHER OF A BOY ATTACKED BY A PIT BULL WHILE AT A CAMPGROUND 2 YEARS AGO HAS FILED A LAWSUIT AGAINST YOGI BEAR'S JELLYSTONE PARK AND THE OWNER OF THE PIT BULL 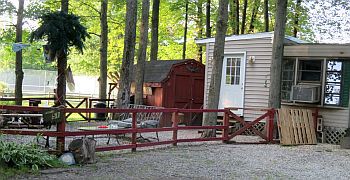 The father of a boy mauled by a pit bull mix two years ago at a Marshall County campground has filed a lawsuit against the dog’s owner, the property owner where the dog was kept and the resort itself.
Shaun Crittendon, of Knox, the father of Dawson Crittendon, filed the lawsuit on his son’s behalf on July 9 against Yogi Bear’s Jellystone Park, Gidget Curtis, of Highland, and Kenneth Biesboer, of Chesteron.
According to the lawsuit filed in Marshall Circuit Court, Curtis owned the lot at Jellystone where the  PIT BULL  was kept and Biesboer owned the dog.
Ten-year-old Dawson was at Jellystone when the dog attacked him at about 9:45 p.m. Thursday, July 13, according to media reports and a MCSD press release.
A news release and previous media reports put Dawson’s age at 10, but the lawsuit says he was 12 at the time. It couldn’t be determined which age is accurate.
Former Marshall County sheriff’s Det. Lt. Duane Culp previously said the dog’s owner was also bitten during the incident while trying to separate the dog from Dawson. The dog’s owner, apparently Biesboer, according to the lawsuit, declined medical treatment from Plymouth first responders, however.
Shawn Crittendon previously told WBND-TV that his son was saying hello to a neighbor when the attack occurred.
Doctors told Dawson’s parents he was bitten 22 times, with one bite about a centimeter away from puncturing an artery, according to WBND. The boy was released from the hospital over that weekend, the boy’s family previously said via social media.
About a week after the incident, Marshall County Prosecutor Nelson Chipman said no charges would be filed against Biesboer.
“After careful review of numerous facts surrounding the entire incident, I have concluded that criminal charges in this matter are not justified,” Chipman previously said in an email. “Consequently, no criminal charges will be filed.”
Officials with the Marshall County Humane Society said a few days after the attack that the dog would be put down after a 10-day quarantine period. Biesboer relinquished ownership, humane society officials previously said.
According to Crittendon’s lawsuit, Biesboer had been living with Curtis at her lot. Biesboer obtained the pit bull about five to six months before the attack.
The lawsuit also claims the pit bull “had exhibited vicious tendencies, including barking and charging at individuals. In addition, the pit bull on at least one occasion had bitten or attempted to bite a child of another resident at the (park).”
Both the Curtis and the Crittendon lots are on the same cul-de-sac in the campground. Dawson was in the cul-de-sac when the pit bull left the Curtis lot and mauled him.
“The attack was vicious and unprovoked,” according to the lawsuit.
Crittendon claims in the lawsuit that the campground “knew, or should have known,” about the “vicious propensities” of Biesboer’s pit bull. Park rules require that dogs be kept on a leash, according to the suit.
As well, Crittendon says Biesboer was negligent in “his handling and management” of the dog and for allowing it to attack Dawson, the lawsuit states.
Curtis was negligent for “harboring the pit bull on her property” and in managing the dog, according to the suit.
Crittendon seeks unspecified damages for medical expenses, future losses, court costs and attorney fees.
A published telephone listing for Shawn Crittendon, or his wife, Inez Crittendon, could not be found. They could not be reached for comment.
It wasn’t immediately clear if Curtis or Biesboer have hired attorneys. A published telephone listing for them could not be found.
Jellystone’s attorney, Indianapolis-based Jonathan L. Bucher with the firm Schutz & Pogue LLP, declined comment.
“Unfortunately, it is our policy to not comment on pending litigation,” Bucher said Friday via email.
The defendants have not yet filed a response to the lawsuit.
https://www.thepilotnews.com/news/lawsuit-filed-in-jellystone-pit-bull-mix-attack-of-knox/article_ebad3ef2-b733-11e9-b3ed-7beab255646d.html?fbclid=IwAR3VZL2U2pzRfh_J6PyllzoJdqSrhRCgI_uG81p_3cHbBZ4oxcsMFQ5_UXs