ALVIN TX - A GRANDMOTHER RESCUED A GREAT DANE ...2 MONTHS LATER THE VERY LARGE DOG ATTACKED A GRANDDAUGHTER BITING DOWN ON HER HEAD AND RIPPING PART OF HER EAR OFF!!! 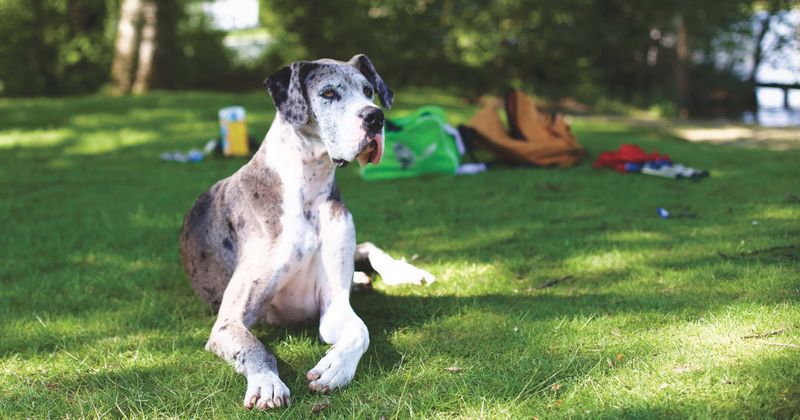 A 15-month-old toddler needs reconstructive surgery after her grandmother's pet dog ripped off part of her ear in a horrific attack. Earlier this year, Michelle Eling's rescue dog Harvey, who she had owned for two months, pounced on little Olivia, Daily Mail reports.
Olivia, now 18 months old, was playing with her mother Brittany, 23, on Michelle's kitchen floor when Harvey bit the toddler "out of nowhere."
The toddler, who had her right ear nearly ripped off when the three-foot-tall pooch tried to put her head in his mouth, was forced to undergo surgery and a skin graft following the savage attack. 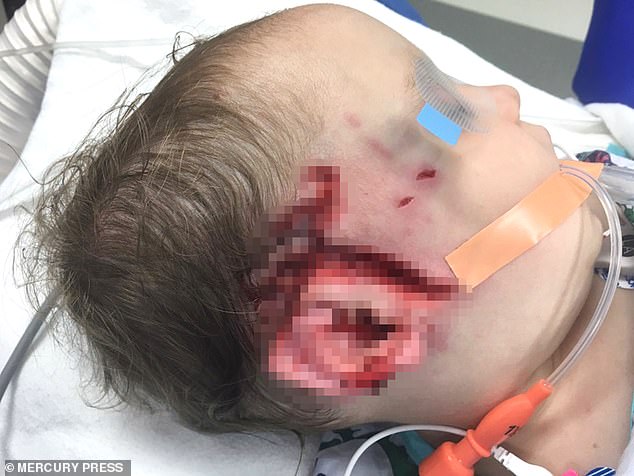 "I was standing in the kitchen, Olivia and Brittany were on the floor playing, Brittany was making her giggle," Michelle, from Alvin, Texas, recalled. "I heard Harvey growl. Then I just heard Brittany scream 'no', I turned around and saw him lunge at Olivia."
"We couldn't get him loose. Harvey went to readjust his bite on her head and my son, Alex, managed to pull him away," she continued. "If he hadn't and he had got hold of her head, I would have had to decide who to save, my pregnant daughter or my granddaughter. All that was going through my mind was, 'she is not dying in my kitchen'. There was so much blood, I thought she was going to bleed out."
Brittany, a full-time mother of three, was eight months pregnant when she stepped in to save her eldest daughter.
Following the incident, little Olivia underwent a one-hour cosmetic surgery to re-attach the tip of her right ear. 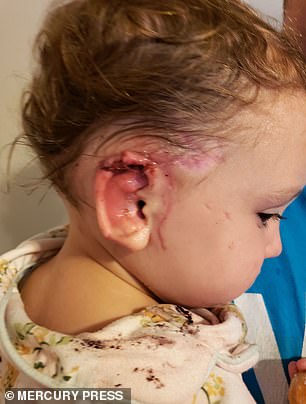 But that was not enough. The traumatized toddler also had a two-hour skin graft procedure on top of her head but has been left with permanent scars on her face since the attack.
Since the incident, Olivia has become wary around other dogs and sometimes wakes up from her sleep grabbing her ear.
Harvey, a Great Dane, was taken into quarantine for 10 days before being put down by animal control. His behavior is believed to have been the result of abuse he suffered at the hands of his previous owners.
"I usually tell the dogs to go away if they approach us. For some reason, I let him come over and out of nowhere he bit her head," Brittany said. "He was trying to get her head in his mouth. I've blocked it out so I only remember bits. I remember my mom and brother trying to pull him away and I put my arm in his mouth."
"All I could think was please keep crying because I knew if she was crying then she was alive," she recalled. "There was blood everywhere. I was pregnant but I wasn't thinking about me. I just wanted to save my daughter."
As Brittany realized how close she had come to losing her daughter, she wanted the dog put down. However, 45-year-old Michelle said she felt sorry for Harvey and blamed his previous owners for his actions.
"It was a complete shock because Brittany was a sweet dog, you could just tell he'd been abused," she added. "He didn't know how to be a dog, he didn't know how to run and didn't like going on the grass. He didn't have a good life, but he was sweet and he wanted attention."
"Shame on the people who owned him before, I just hope in the two months he spent with us it showed him a different life," the dog lover explained. "You don't want to see an animal put down but once they have done something like this there's no going back.
Michelle called it a "Catch 22" situation, saying you may "love an animal but you love your kids more."
"Once they have a taste of blood, it's too late," she said. "I wasn't going to be responsible for him doing that again. He nearly killed my granddaughter. I thank my lucky stars she's alright."
https://meaww.com/toddler-reconstructive-surgery-grandma-three-foot-tall-great-dane-bit-ear-off
https://www.dailymail.co.uk/news/article-7493923/Toddler-needs-reconstructive-surgery-EAR-ripped-Great-Dane-Texas.html

You thank your lucky stars your granddaughter is alright? HER EAR WAS TORN TO SHREDS! She is alive but NOT alright!

Why do people adopt large, dangerous dog breeds when they have young children in their lives? It defies logic!

@Anonymous, I know what you mean, it boggles the mind, it seriously does! She had a "rescue" (why was it called that) for only 2 months... and they let a little child play with it. Naive, ignorant or just plain stupid, another child is paying the price.