NANAIMO, BRITISH COLUMBIA CANADA - IN AN "UNFORTUNATE ACCIDENT" 2 PIT BULLS MAULED A THERAPEUTIC MINIATURE HORSE FROM HER STALL TO OUT INTO HER FIELD ...BIT OFF HER LEFT EAR!

A therapeutic miniature horse is now the one requiring care after its ear was bitten off in an attack by  TWO PIT BULLS  south of Nanaimo on Monday.

The two-and-a-half-foot-tall horse, named HaliBerry, was first attacked by the dogs in its stall and the attack continued out into the field, said the horse’s owner, Eileen Stevens, of Golden Maples Farm in Cassidy.

“My horse is very badly injured, she’s missing her left ear, but she’s a fighter … and she’s going to recover,” Stevens said. 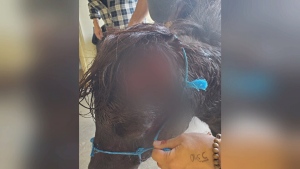 The dogs broke through her stucco wire fence “like it was spaghetti” and Stevens spotted them outside her door when she went to take her horse for its morning walk. After she realized what was happening, she phoned her brother who came right away, and the two of them tried to fight off the dogs with a walker and a broom.
“It was so frightening because it was all happening so fast, but it seemed like so long…” Stevens said. “I just wish I could stop the pictures in my head. To see her running and then when that dog got her ear, part of me says, thank God I don’t have full hearing because I couldn’t hear her scream. Because horses will scream.”
Stevens said she decided to talk to the media about the incident both to correct some misinformation that was spreading, and also to let people know about the dog owner’s response. She said he surrendered his animals to be euthanized and is paying all her veterinary bills.
“It’s such an unfortunate accident because this man has lost his two dogs now and they’re family pets…” Stevens said. “I know his pain, because I’ve had to put animals down before and I’m just hoping and praying that we don’t have to do that with HaliBerry, that she’s going to pull out of this.”
The horse is going to survive, said Colin Scruton, equine surgeon at Equerry Equine Surgery and Sports Medicine hospital in Nanaimo. He said if the bites near a joint had become infected, or if the bites had punctured the abdomen, “then yes, it could have been worse, but no, it wasn’t worse.”
Scruton said although treating a horse for dog bites isn’t common, it comes down to wound management. Cleaning up the wounds took a long time and the horse was given antibiotics.
“Our next challenge is to allow the wounds time to heal and hopefully where there once was an ear canal, for the wound to [heal] so at some point we can skin graft it in the future,” he said.
Scruton said psychologically, the horse seems normal.
“She was in a lot of pain and suffering and shock for the first day, but she’s very interactive [now],” he said. “I have photos of her playing with my son yesterday.”
Stevens said she once owned a pit bull “and it was a lovely animal” and said she thinks Monday’s attack was just a case of dogs getting together and having a “pack mentality.”
Stevens said a farrier, who is a friend of hers, has agreed to look after HaliBerry for the time being. Stevens said she might start up a GoFundMe to build a new shed because she’s concerned the existing stall will no longer seem like a safe space for her horse. The therapeutic care HaliBerry has provided will be on hold. Stevens said some people like to brush and talk to the horse, or a two-year-old might just sit on the horse and giggle.
“She’s that gentle. Everybody falls in love with her,” Stevens said.
https://www.coastmountainnews.com/news/miniature-horse-has-ear-bitten-off-in-pit-bull-attack-on-vancouver-island/