WARWICK RI - PIT BULL DRAMA: 3 PITS "SOMEHOW" GOT LOOSE AND ENTERED A CVS ...SURVEILLANCE SHOWS ONE JUMPED UP ON AN EMPLOYEE NIPPING AT HER SIDE ...POLICE LATER SHOT AND KILLED 2 OF THEM ROAMING ...RECORDS SHOW THAT UP TO 12 CALLS HAD BEEN PREVIOUSLY MADE ABOUT THE SAME DOGS


(WPRI) — Posted: Aug 28, 2019  The dogs that were shot and killed by a Warwick officer earlier this month were known to the police department, Eyewitness News has learned.
On Aug. 15, the Warwick Police Department received a report that three loose dogs entered the CVS on Buttonwoods Avenue. One of those dogs ended up attacking an employee, according to police.
In surveillance video released by the Warwick Police Department, two of the dogs can be seen jumping on the woman several times before running away. 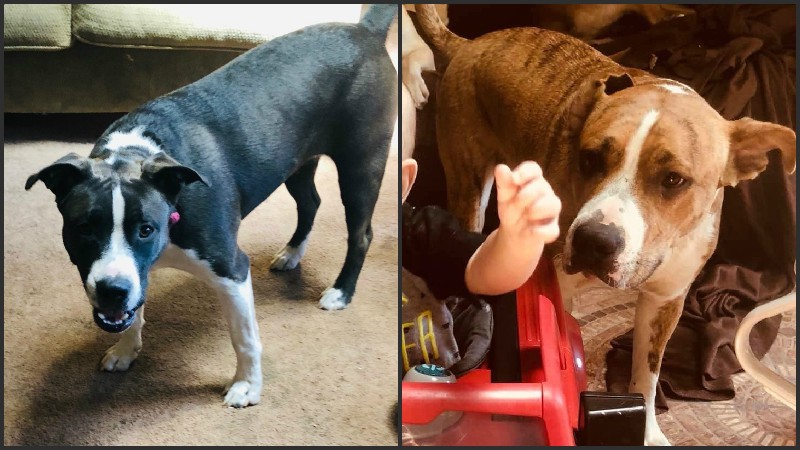 The police report describing the incident reads, “The tan dog with the white spot lunged up at her and you can see the mouth of the dog close on her right hip area and shirt on her right side.”
According to a police report obtained by Eyewitness News, the woman showed the responding officers two red marks on her that appeared to be bruising. The woman refused medical treatment since the dogs did not break the skin when they jumped on her.
A few blocks away, Officer Jeremy Smith and an animal control officer found the three pit bulls roaming around on Keeley Avenue.
The police report said two of the dogs charged at Smith while the animal control officer was grabbing tools inside his vehicle.
Smith, already having previous knowledge that the dogs may have attacked someone, reported that he feared for his safety.
“The intensity of the situation heightened and began to rapidly evolve,” he wrote in the police report. “I was in fear for my safety as the dog pursued me.”
The police report goes on to detail the moments when Smith decided to shoot and kill two of the dogs, who ultimately charged at him in an aggressive manner. The third dog was scared off by the gunshots.
This is not the first time police have received complaints about the dogs roaming the neighborhood and acting aggressively towards residents and other dogs.
The police report details at least five phone calls between March 1, 2018 and June 16, 2019 regarding the same dogs running loose in the neighborhood and acting aggressively. In addition, the police report lists seven other calls – the oldest dating back to December 2017 – that also may have involved the same dogs.
The dogs were also not up to date on their vaccinations but did test negative for rabies, according to the police report.
The owners of the dogs, Tiffany Fletcher and Andy Lucini, describe them as loving.
“I don’t believe for a second that they did. I don’t think they bit anyone,” Fletcher said.
“Our youngest son is 5 months old, he will sit in his walker and the dogs would walk up to him and start giving him kisses,” Lucini added. “It just doesn’t add up at all.”

Tiffany Fletcher, who owns the dogs, Mia and Peanut, has posted a GoFundme page to raise donations to Handsome Dan’s dog rescue in RI in memory of her dogs.
https://www.wpri.com/news/local-news/west-bay/report-dogs-shot-by-warwick-officer-were-known-to-police/?fbclid=IwAR2IGHjFDYPnAR6ofODaoOMQXJSkWmeE7nsrFqY6ozbVre2am8pkScQ2k2o

Isn't it ridiculous to set up a GoFundme in memory of two pitbulls shot by police for running loose, threatening, and attacking people? Why didn't the owners properly confine their dogs? Why honor these dogs?