BRENHAM TX - "2 FAMILY DOGS AT GRANDMOTHER'S HOUSE" "SOMEHOW GOT OUT" OF THE HOUSE AND ATTACKED 5-YEAR-OLD MASON SWAIN ...LEFT EAR GONE AND HALF HIS RIGHT ...UPPER LIP GONE AND MOST HIS EYELID ...PARENTS DANCE, DANCE, DANCE AROUND NAMING THE BREED OF THE MEAT GRINDER !!!!


A child from Brenham is in critical condition at Children’s Memorial Hermann Hospital after his parents said he was mauled by two family dogs.  Mason Swain, 5, was Life-Flighted to the Texas Medical Center last Friday.

Mason’s parents, Kelton Swain and Casey McDaniel, said that even though Mason spent plenty of time with the two dogs in the past, they were careful with Mason around them. Still, the worst happened.

According to McDaniel, Mason was at her grandmother’s house when the attack happened.
“The dogs were initially locked up in the house and when Mason came outside the dogs broke out of that room and they got to him,” McDaniel said.

Mason’s father found his critically injured son in the backyard.
“Mason was lying on the ground,” Swain said. “I seen his face and I just broke down, you know? I thought he was pretty much gone until my baby said, ‘Daddy?’ And I looked down and I said, ‘Oh, you’re still with me, baby! Keep fighting! Keep fighting … daddy’s here.’”

The dogs were put down immediately.

Mason was airlifted to the Texas Medical Center where he’s already undergone three surgeries and will need many more. 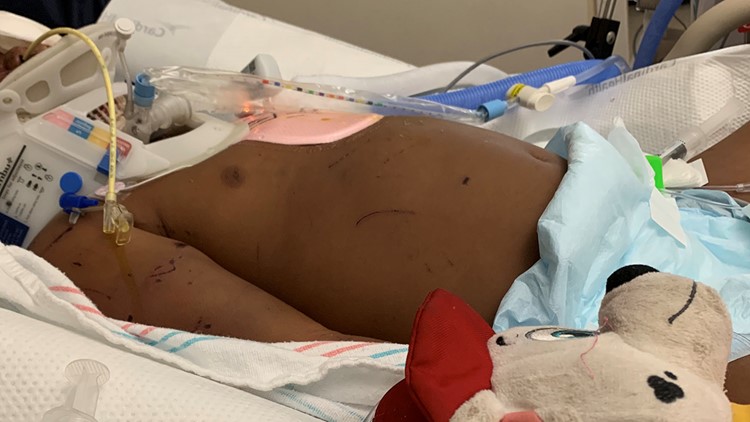 “He had played with these dogs from, pretty much from birth almost, you know? So, it was not expected. These were family dogs,” Swain said.

For other parents, they offer this advice: “Stay alert. You can’t trust a family animal because they are animals.”

Mason is described as being a happy boy who has brought joy to the family since the moment he was born. A home video shows Mason happily dancing around the living room to Pharrell’s song, "Happy."

To follow Mason’s recovery and to help support it, you can check out the GoFundMe account set up to help the family with medical bills.

Can you imagine thinking your precious child is dead, to then find out he or she is not? This is what pit bull ownership looks like, people!! Children missing parts of their face, and losing their ears.

Socializing does not work with pit bulls. Many people think socialization of dogs means with other dogs. It does not. It means exposing dogs to as many different situations as possible in the first 4 months of its life. Exposing puppies to children, old people, wheelchairs, cars, bicycles, animals, you name it.

Having this child around pit bulls since his birth did not protect him. The only way to prevent this tragedy, is to avoid pit bulls altogether.

Wanna know what's hard? Trying to put your precious child back together.

If they were such lovely family pets, then why were they locked away? Now your child doesn't have a face and will have to deal with that for the rest of his life.